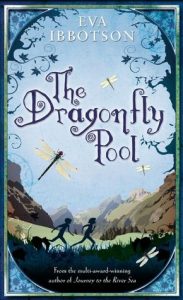 The Dragonfly Pool by Eva Ibbotson

Tally likes to help people. She didn’t want to go to boarding school but the war was coming and she got a scholarship which saved her from the dangers of London’s East End. What she found when she arrived was not at all what she had been expecting. She makes friends among a delightful group of misfits, but a chance trip to the cinema with one leads to a driving interest in helping people in the troubled kingdom of Bergania, threatened by the forces of Hitler massing on their borders.  What happens next is deftly told by Eva Ibbotson who conjures up visions and characters like Monet conjures up a sunrise.

This is a hugely enjoyable tale of slightly eccentric people who are able to find themselves through some great adventures.  Kings and assassinations, emigres living in the past, children living for the future. Dancing and cultural exchanges, train trips through mountainous country pursued by two bears…  It’s a story that draws you in then takes you on a madcap dash through to the end.

I loved the details of school life, particularly the biology lessons (and the snide remarks about standard biology lessons!) and the housemistresses that were more interested in their own projects.  I really enjoyed the twists in the tale that turned a possibly predictable tale into something entirely different. Especially the ending.  And I loved the quotation, supposedly from a book of ‘sayings’, that is probably one that I should adopt:

You cannot stop the birds of sorrow from flying over your head, but you can stop them nesting in your hair.

The Dragonfly Pool by Eva Ibbotson, who sadly died in October 2010 aged 85.