Since I have another book review scheduled for next Wednesday, which is Kid Lit Blog Hop day and the first day of a Blog Tour by Julie Grasso, I thought I’d nip over to the more adult books on my list for a short break from MG lit.  Strangely, I discovered I hadn’t reviewed either of the earlier books in this series. 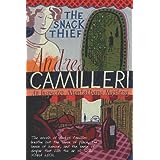 The Snack Thief is the third in Andrea Camilleri’s wonderful series starring the Sicilian detective Salvu Montalbano.  Here is a heady combination of crime, intrigue, sun, seafood dishes, pasta and a tangled love life.  Salvu is a bit snitty round his staff sometimes, but he’s also great fun.  My brother, who’s read them all in the original Italian/Sicilian (!), says Signor Camilleri is somewhat formulaic, but I haven’t yet found that.  What I have found is pacy writing, formed largely from dialogue and pithy description.  The Sicilian woman of a certain age  – a balloon with eyebrows – and Montalbano settling down to wait – to engage in an immobility contest with a lizard – particularly caught my eye.

As a crime novel there is plenty of blood, nefarious deeds, violence and sex.  Not for under 13s. There is also police procedure, lack of police procedure as in who doesn’t follow the rules and therefore screws the investigation up, and plenty of red herrings (as well as squid, clams and other fish).  I liked the “there are 76,000 people in this area and 75,970 eat fish.  The other 30 are babies” when railing about some forensic evidence on a murder weapon.

Plenty of twists and turns, including hairpin bends on mountainsides.  Lots of fun and friends just as you like to make in a series.  Start with the first in the series –  The Shape of Water – and look forward to the visual feast when it comes back on BBC4 in the dark days of winter (I hope).

This isn’t really a review.  It’s just what I like.

The Snack Thief by Andrea Camilleri