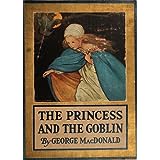 I was reminded of The Princess and the Goblin, and its sequel, The Princess and Curdie, in the Children’s Book Week Giveaway earlier this year when I asked for people’s favourite children’s books.  These were part of my childhood, or maybe tweens, and I have memories of going to the library, which was in a large converted tithe barn, with oak beams and shingled sides, in order to take them out.  You never saw them in book shops, so I never owned a copy.  Now I have them both on Kindle, and I’m very pleased to make their re-acquaintance.

Princess Irene is the sort of princess that I initally find too goodie-goodie, but warm to as she goes along, since she has plenty of spunk, and also good taste, since she likes Curdie, the son of a miner, who is altogether smart and heroic.  It’s a story told by the invisible narrator in an old-fashioned style, occasionally crossing the fourth wall to tell “you, the reader” what you might be thinking now, and explaining it to you.  There’s not too much of that, though, and what I love is the amazing imagery, the darkness and tension of the dastardly cobs (goblins/kobolds) deep below the mountains, and the magical appearance of Irene’s great-great-grandmother, also named Irene.  In fact, as I read her first appearance, with the silver bowl to wash Princess Irene’s dirty face and the soft white towel to dry it, I had a flashback to my youth, remembering this magical creature as I read about her for the first time.

This is a fast moving story with adventures underground, twists, turns and double loops back.  There are enough clues to tantalise you into thinking you know what will happen, but you don’t get it all, and there are some lovely touches with vain cob queens and greedy people of both races.  There are plenty of moralistic statements, mainly about telling the truth and not being believed, and putting up with minor injustice as it will all work out in the end.  And of course it does, although I always remember the second book with more warmth, so I’m looking forward to re-reading that one as well.

I think The Princess and the Goblin is an excellent MG read, although some may dislike the description of the fights between the humans and the goblins.  There are plenty of long words though, like my books!  It’s an intriguing fantasy mystery with a magical touch, firmly rooted in noble values that I hope kids still aspire to.  Old-fashioned, maybe.  Classic, definitely.

The Princess and the Goblin by George MacDonald, first published in 1872.

Note that there are a lot of editions available for Kindle.  I got the free public service one, which has an irritating habit of missing paragraphs between speakers in dialogue parts but the link is to one that looks more like the one I remember reading.  I think the edition with both books in it might be the best buy.

Book Review: The Princess and the Goblin by George MacDonald