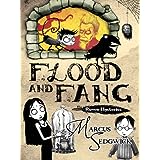 Flood and Fang was one of the first books on my to-read list.  I picked it out of the books recommended for children’s authors to read when I went to a workshop before I published The Princelings of the East.  In fact, the workshop was why I went ahead and self-published Princelings.  In a nutshell, Raven (the castle’s resident raven) spots a number of potentially nasty things going on in Otherhand Castle, and tries to draw them to the attention of the weird and wonderful characters who inhabit it.

The ink-washed design of the cover is reflected in the illustrations and motifs by Pete Williamson that punctuate the text.  It is visually appealing – a chapter book broken up into small chunks, encouraging readers to go on, as if the narrative wasn’t encouraging enough!  I started reading the raven’s story  and thought there was a lot of complicated information about the castle and its inhabitants.  I wondered at the vocabulary in use (extensive) but realised the pace and the delivery would encourage readers to learn new words and not lose the story.  I very soon lost my author-head, and continued in reader-mode, rollicking through a delightful story of gothic daftness, mystery and adventure.  The little boxed paragraphs at the start of each chapter seemed to be a quirky extract from a history of the castle, but by halfway I’d realised these were useful clues for the reader, if not an integral part of the plot.

Sedgwick reminds me to use the sort of names that kids love.  I wondered how many might look up Spatchcock to find out that it isn’t just a made-up funny word, but an old-fashioned way of cooking game birds  – but then I looked it up myself and found it was also “to insert (a phrase, sentence, story, etc) esp. incongruously” both of which suit the owner of the name admirably!  I love Valevine’s fear of the use of the Glottal Stop, which, being a mystery to the raven, becomes his catch-all phrase for anything scary!

It’s a story that would be suitable to read aloud to eight years and up, but would engage older children reading to themselves, and probably become one of those well-thumbed books, even on an eReader.  In fact, I expect I’ll read it again, it’s such fun.  This is the second Marcus Sedgwick book I’ve read, this time for a younger audience, and I loved it just as much.  I’m now a confirmed fan.

Flood and Fang by Marcus Sedgwick

This is the first in a series, the Raven Mysteries, and I’ve found six so far.