Last year I read the first of Flea’s five Christmases by Kevin George, and thoroughly enjoyed it.  I wonder whether I’ll be completing the set in 2016?! 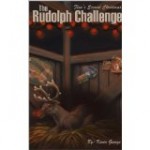 This book starts with a hugely exciting disclosure of how Jack Frost came to be Santa’s enemy.  It’s a great bit of writing, full of pace, inventiveness and the stuff of legend.  The story then starts in earnest, back with Flea and his ‘earthly’ foster mother, who have moved once more (she never stays anywhere long, for reasons we may find out in book five).  It’s not long before Flea is whisked off to the North Pole for the Christmas season, but not before some weird events in his earthly home, some of which are probably meant to be funny.

Up at the North Pole he is too early for the toy building season but just in time for the elves’ Snow Wars  – a multi-event team game in which only one team can win.  It was fun, but I wonder why so many books feel the need for this type of event now.  Did they happen before Quidditch and the Tri-Wizard Tournament?  Maybe if it’s a school story it’s relevant, but apart from Flea discovering one of his special powers (and I think there are plenty of other ways that could have been revealed) it felt like filler to me.  On the whole I felt the story developed well through the course of the book, and the addition of cryptic predictions from a strange elf certainly adds to the ‘red herring’ element of the story.  Not that Flea’s cryptic warning seemed to come true, at least not in this book.

It was unfortunate that my ebook was in need of some re-edits at the most important part of the story, at about 80%, where some names were wrongly attributed as well as it being difficult to determine exactly which ‘he’ was being referred to for one long passage.  Also one character was revealed as a fake, yet that one disappeared in the next paragraph and the real one was back with no indication of where they had been/gone.  Also I have no understanding of why the message on the bumper sticker was so hilarious. We do have silly bumper stickers in the UK, so I assume the message was a parody of one in the US that we don’t have.  But I read the section three times in case I’d missed something.

Flea’s Five Christmases is a cleverly inventive series with enjoyable characters who can be, as most teens can be, lovable but extremely irritating at the same time. There are plenty of twists in the tale, but I’m less keen on reading the rest than I was after the first one.  I’m giving it 3.5 stars and reserving my decision on whether to continue with the series.