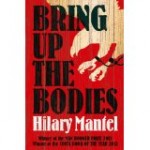 Bring Up the Bodies won the MAN Booker Prize in 2012.  I only remember reading one prizewinner before (Hotel Du Lac).  I always think they’ll be too ‘clever’ for me.  Well, Bring Up the Bodies is clever, but not too clever if you’re prepared to snuggle up with it and give it some focus.  It’s not for kids, although teenagers interested in British History would enjoy it (they’ll already know the ruder words).

This is the second in a series of book about Thomas Cromwell, a mover and shaker in Henry VIII’s court, although not a nobleman.  Powerful, and increasingly rich, but not yet a ‘sir’.  Anyone with any sense calls him sir unless they are filthy rich and with Lordships or better going back generations.  This episode is all about Anne Boleyn, Henry’s second wife.  You remember: divorced, beheaded, died, divorced, beheaded, survived.  Just remember the order the women came in!

I found the book hard to get into, then I realised that I needed to settle down in proper reading mode – comfy chair, good light, give myself an hour or two to immerse myself.  It was good for me to read like that – I don’t often do it.  I had been a little put off by the family tree charts at the front, looking at them and thinking, “I’ll never remember all these people.” Although the charts can be handy, I found I didn’t need them.  The flow of the writing, the reminders of positions and relations, are all included in the flow of beautiful words.

I found myself transported into 1535 as if it was a modern world.  As in, everywhere about me was contemporary Tudor England.  Many historical novels still leave you as an onlooker; this had me in there, smelling the ordure of the streets, wondering what the news would be next day.  In some ways, reading A Christmas Carol a month ago, and marvelling at the description I quoted in my review of that, prepared me for Hilary Mantel’s wonderful descriptions.

I know I should have marked them at the time, but I search the book for some examples: I can’t find any more ordinary ones, or should I say extraordinary ways of describing the ordinary.  These two stand out.  Death and Truth (which I was so struck by that I remembered it all the way through).

You should not desire, he knows, the death of any human creature. Death is your prince, you are not his patron; when you think he is engaged elsewhere, he will batter down your door, walk in and wipe his boots on you. (p.162)

What is the nature of the border between truth and lies? It is permeable and blurred because it is planted thick with rumour, confabulation, misunderstandings and twisted tales.  Truth can break the gates down, truth can howl in the street; unless truth is pleasing, personable and easy to like, she is condemned to stay whimpering at the back door. (p.190)

I found the application of such truth in Thomas Cromwell’s tale an overwhelming insight into the justice of the time, of the tale.  Much later Thomas asks himself (or the reader) “Were they guilty? Yes, but maybe not as charged.”  The manipulation, the half-truths, the finding of evidence to support the required result are as relevant today as they ever were.  So I found myself immersed in this story.

There is a stylistic element of the book one needs to grasp early, and it continued to elude me for a long time. ‘He’ is Cromwell.  You may be in a paragraph with Cromwell and five others, but if ‘he’ does something, then it is Cromwell who is being referred to.  The book has a single focus. It’s third person narrative but entirely from Cromwell’s point of view.  Once I’d got used to this I found the author writing ‘He, Cromwell’ more often than I needed.

There is no way I can do justice to this book in a review.  I’m so glad my bookclub chose it, since I wouldn’t have tackled it otherwise, and I nearly gave up on it after 50 pages.  After 75 I was hooked, but realised I needed to wrap myself up in it, partly so as not to forget who’s who.  I have trouble with that these days.  Reading it finally over three days, I had no trouble knowing who was who, even when a single person has three different names (surname, title name and ceremonial post).  I recommend it.  I will read more Hilary Mantel.

Bring up the Bodies by Hilary Mantel (Thomas Cromwell #2)

I read this library copy with my bookclub.

Book Review: Bring Up the Bodies by Hilary Mantel

One thought on “Book Review: Bring Up the Bodies by Hilary Mantel”