This is the first book I’m reviewing as part of the Safari Small Fry Challenge.  It could fit into one of two categories – but I’m going for the “something precious” one, i.e. the Vulcan’s Gift.  Exactly what the Vulcan’s gift is I am not prepared to divulge – you’ll just have to read the book – but I promise you it’s cool. I’m also putting this in the Kid Lit Blog Hop, but it’s very much upper end of MG, and more tween or YA. 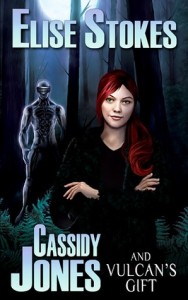 I loved the first Cassidy Jones book, which I reviewed last year, so I was looking forward to the next in the series.  I have to explain that in the first book Cassidy developed superhuman powers as a result of an accident.  Being only 15 years old, she’s not only having quite a time adjusting to them yet keeping them quiet, but also messing up her relationships with boys, including her twin brother.  Yet someone is out there doing strange things, putting people in danger who have been kind to the local kids, and stealing tigers from a private zoo.  Cassidy suspects she knows who.  Fortunately her friend and guardian in her super-power behaviour, Emery, is more inclined to act on hard evidence, so that is what these two talented teenagers do.

I confess I didn’t enjoy this book as much as the first, mainly because it took a long time to get past the teen angst that Cassidy suffers in direct proportion to her growing powers.  I was well into pony books when most were in the teen angst phase, so I’ve never had a lot of patience with it.  Unless the boy was on horseback, of course. The more I read of this age in co-ed schools the more I’m convinced that all girls should go to single sex schools.  The trouble is, boys tend to learn to behave better with girls when educated in mixed sex schools.  What to do (sigh). The fact was, I didn’t really enjoy the book till it got into the second half, with Ms Stokes’ customary brilliance in devising plot, scenes and excitement.  I think it is necessary for Cassidy to go through all this soul-searching as part of coming to terms with her new self. I’m not sure I want to be with her while she does it.  However I suspect most teenage girls won’t mind – and probably the boys won’t either, since she’s a real kick-ass heroine.

However, what I want to know is why the down-and-out she befriends in Seattle is a dead ringer to the panhandler I gave some money to in Seattle 25 years ago, and got ribbed about it by my colleagues at the time.  Good luck, Joe.

I recommend this book to older MGs and Younger YA, it’s full of excitement and action!

4 thoughts on “Book Review: Cassidy Jones and the Vulcan’s Gift by Elise Stokes”