Today I’m pleased to be part of Jennifer Ellis’s blog tour for the first in her series The Derivatives of Displacement.  I received a kindle copy of A Pair of Docks free in return for my honest review. 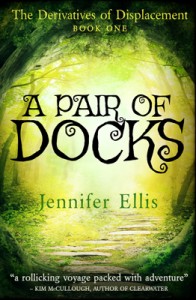 A Pair of Docks

Available in paperback or ebook, 300 pages

Fourteen-year-old Abbey Sinclair likes to spend her afternoons in the physics lab learning about momentum and gravitational pull. But her practical scientific mind is put to the test when her older brother, Simon, discovers a mysterious path of stones that allows them, along with Abbey’s twin, Caleb, to travel back and forth between their world and what appears to be…the future.  Unfortunately, they’re not the only ones who know about the stones, and they soon realize their lives are in danger from a man known only as Mantis. Abbey, Caleb, and Simon must follow a twisting trail of clues that will lead them from their autistic neighbor, Mark, to a strange professor who claims to know the rules of the stones, and to multiple futures—some of whose inhabitants don’t want to stay put.

Sometimes when I’m reading I am torn between what I think and what would my 14 year-old self think.  This is one of those books.  My adult self is pleased to find a book that is full of both correct and well-imagined science, an enthusiastic young female scientist, and a great and unusual adventure. My adult self also cringes at what feels like overdone description, especially in the early time hops, some characters that feel too extreme, and wondering how 12 year olds will react to Mark, who plays an important role and is delightfully displayed with all his autistic quirks and fixations.  I think my 14 year-old self will be wrapped up in the book, irritated by too much detail, but identify with Abbey for most of the time.  Simon and Caleb, her brothers, are cool and well characterised, her mum and dad are largely absent due to her mum fighting an election campaign (there’s a twist on the absent parent syndrome) – so absent that when her mum referred to Peter I had no idea she meant her husband for a few paragraphs.

The detail involved in the descriptions of the first two time travel trips irritated me since it left little room for the imagination, although to me the ‘where’ was obvious.  Funnily enough, the second one was eerily like the first book I wrote, which is discarded in the mists of time (the method of entry, the skin in the bubble, the maze, the strangeness).  It was a little like deja vu.  That was the only likeness though.  I loved the whole premise of the stones until it came to the witchcraft element, which I felt jarred with the scientific aspect of Abbey’s story.  I can see that the author is building this up for the next in the series, but I would rather she had found another way of dealing with the gathering conflict than falling back on the trope of destiny and birthright.  However the excitement of the adventure, the originality of the time travel methods,  and the twists and turns involving different timelines as well as mysterious characters makes the story fascinating and compelling.

I think this book will find a big audience among boys and girls who enjoy science and want a bright hero or heroine – years ahead of her class but still coping in a regular school.  It will also find an audience among the many adults who enjoy clean time travel books, not least because of the mystery and misdirection involved with some of the terminology.  I wish the author hadn’t named one company Sinclair Systems (which I associated with my ZX Spectrum) and the mother Mrs Beckham, but that’s just me.

I’m struggling to decide whether this book is good or great.  Since I’m not sure, it’ll have to get 4 stars rather than 5.

Jennifer Ellis is the author of A Pair of Docks, and In the Shadows of the Mosquito Constellation (forthcoming). She writes contemporary action-adventure fiction with a dystopic edge for both adults and children. She lives in a small ski town in Canada with her husband and two boys where she skis, does ballet, cooks, joins too many book clubs and works as environmental researcher. She blogs randomly but regularly at  http://www.jenniferellis.ca and can be found on Twitter at @jenniferlellis.  A Pair of Docks can be purchased on Amazon.com at: http://amzn.to/1aytTKD

Book Review: A Pair of Docks by Jennifer Ellis

16 thoughts on “Book Review: A Pair of Docks by Jennifer Ellis”