Continuing my trek through the NATO Alphabet, today’s letter, F is for Foxtrot.

According to Wikipedia, the foxtrot is a smooth, progressive dance characterized by long, continuous flowing movements across the dance floor.

It can also be a horse movement (although I’ve never heard it used with the fox bit), a film, a tv series, a couple of albums, a comic strip and a submarine.  In fact I think most letters of the NATO alphabet can be classes of submarine.

When I was a young girl, there was a popular tv show in the UK called Come Dancing.  There was a bit of reverse snobbery about it (oh- you don’t watch that?).  I suspect this was a manifestation of English class and regional bias.  Blackpool was the centre of the ballroom universe, and one image of the amateur ballroom scene was of girls and their mothers staying up all night after finishing work at the factory to sew the required 10,000 sequins on the dress.  Check out the song “Doreen is Dancing” by Ralph McTell.

Times have changed.  One of the most popular shows these days, occupying the prime early evening slot on Saturday, is Strictly Come Dancing – known as Dancing with the Stars in many other countries.  It’s a pro-celebrity challenge with snide comments from the judges (although some are fair and helpful) and a combination of has-beens and wannabes among the celebs.   Except that some of them are real celebrities switching genres, like top sports stars.  I’m addicted to it – once the first few no-hopers have been eliminated.  The standard of dance is breathtaking, and I find the glitz and glamour very relaxing. 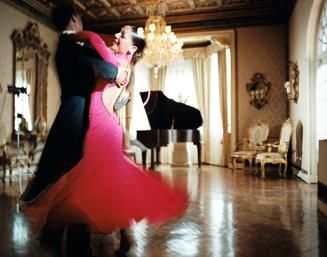 And of course the foxtrot is one of the dances.  I was taught the basic shape of the dance at a do we had in our village a couple of years ago, and would love to have another go.  Dance is a great way of getting exercise and meeting people.  Even if my brain no longer connects with my feet.

Anyone for a foxtrot?

26 thoughts on “F for Foxtrot”