Saturdays mean book reviews here, so knowing that W is for Whiskey in the NATO alphabet I set out to find a suitable book for the A to Z Challenge.  I was tempted to search out Whiskey Galore, which is probably better known as a film, the story of what happened during wartime when a ship loaded with whiskey was wrecked on a Scottish island.  Then I looked for a pony book suitable for my MG Lit readers, hoping there might be a horse called Whiskey ( I knew a pony called that when I was about ten!).  I had some help from friends on the Goodreads Good Middle Grade Reads forum but didn’t fancy reading the one suggested. Then I searched Amazon, and found… 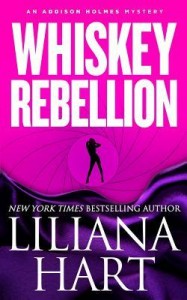 It’s a punchy start, with Addison Holmes crawling through a graveyard in the pouring rain, wearing a tracksuit and no underwear, with rips in her clothes (not to mention her skin) and a dead body lurking in the background.  Even though it sounds macabre, there’s a zany ring to this extraordinary set up that compels you to read on…

Addison is a high school teacher with a financial problem or three – the apartment she lives in has been condemned; she has her heart set on a small house that she’s paid a deposit on but is way short of the rest of the finance, and most jobs she takes on to add to her income turn out to be singularly unsuitable for her talents.  Particularly the stint as a stripper.  Fortunately her best friend from high school runs a private investigation agency and lets Addison loose on a couple of surveillance cases.

All this takes place in Whiskey Bayou, a small town outside Savannah, Georgia, where everyone knows everyone’s business, everyone pokes their noses into everything else, and is used to gossiping about it.  Why does nobody know who killed the high school principal, who Addison last saw in the audience of her lamentable stripping attempt?  Why does Addison’s old school enemy, not content with stealing Addison’s fiance on their wedding day, want to take her dream house as well?   And will the hot cop ever stop making Addison feel all hot and gooey?

Well I hope not!

This first in the Addison Holmes series is a fast-paced romance/crime/comedy in the Janet Evanovitch style, but a little raunchier.  Not too raunchy for me, and I am fussy in my reading matter!  I often got irritated by Addison’s complete stupidity and amazing lack of sense, but therein lies the fun in this crazy hoopla.  She is ridiculous, but somehow, you like her!  I laughed out loud a couple of times, the writing is full of admirable similes and descriptions, and I recommend it as a fun read for anyone over the age of consent!

I got this ebook from Amazon where it appears to be permafree.

14 thoughts on “W for Whiskey – Whiskey Rebellion in fact”