Have you ever seen a set of hexagonal columns stretching out from the land and sinking beneath the waves?  Well, I finished with a view of the ones at Fingal’s Cave yesterday, and here are some more. 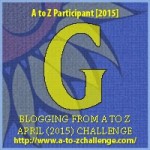 This time we’re in Northern Ireland, at the Giant’s Causeway, which is officially described as ‘polygonal’ basalt columns in a pavement, but they look six-sided to me.

The view as you approach this natural phenomenon is one of an ordinary peninsular sticking out into the sea.  From above you can see that it’s made up of hundreds of hexagonal blocks of blackish rock.  These are hexagonal columns, best seen at Fingal’s cave, where you see both the columns and the cross-section surfaces.  There is one wall of columns at the right of the formation, just where the car park (or rather drop-off point) finishes, but in my view they are not as impressive as the ones at Staffa and around Mull.  The causeway is arguably better, though, and extends further out to sea (at a shallower gradient) than Staffa.

The giant in question was Finn Mac Cool, or Fingal, and it is said that these columns were the start and end of the bridge he made across the Irish Sea and the Firth of Clyde to make land again at Staffa to fight his rival, Benandonner.  Really, in order to make that bridge he’d have had to span Islay, too, but why let another island get in the way of a good story. 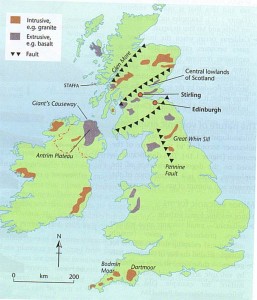 There’s a good map of all the relevant volcanic activity, and lots of nice links on this wikipedia page, but it’s easier to see the locations of both the Giant’s Causeway and Fingal’s Cave on this map, from acegeography.com

If you get a chance to visit either of these geological icons, do.  Giant’s Causeway is easily accessed from Derry (Londonderry), but Fingal’s Cave needs you to get to Mull before you get a ferry trip to the island.  They say Mull is like Scotland in miniature, so if you haven’t got time to tour Scotland, tour Mull and take a boat trip to the Treshnish Islands and Staffa with Turus Mara, too.