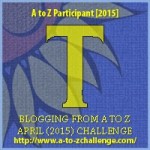 T in my A to Z of Natural Phenomena is for the Transit of Venus across the face of the sun.  This event happens twice, eight years apart, roughly every 110 years (the pattern repeats every 243 years) so the bad news is, you’ve missed it.  It last occurred in 2004 and 2012.

A Transit, in astronomical terms, is when an object such as a planet, passes in front of something big and shiny, like a sun, so that you can see its outline as it moves between us and the sun.  The amazing 17th Century astronomers worked out that by measuring the transit of Venus they could work out the distance between the Earth and the Sun.  Even though I’m a maths graduate I never did work out how they realised that.  The natural philosophers then were absolute geniuses.  Ok, so some of their theories were wrong, but so much was right!

I was lucky enough to be ready and in the right spot on a sunny day for the first recent Transit.  I was in London, working.  The Transit lasted all morning.  By using two sheets of drawing paper I plotted Venus’s position across the face of the sun.  I still have the plot and I’m trying to find it to scan in for you!  The first card was my pinhole camera.  The pinhole projected the image of the sun onto the second piece of paper.  I drew a circle on that paper and angled things so the sun fitted in the circle.  When the Transit began, I marked the shadow that represented Venus.

This was not a simple task.  I had a day’s work to do.  I took the first readings from home.  I managed the next outside the London office where we had a morning meeting.  I managed one there when we left the building, and I got the final ones from our own offices, underneath the skylight in the roof! My colleagues knew I was weird, and said nothing!  I think the transit ran from roughly 6 am (BST) till 12.30 pm or something like that, in June.

The second transit in 2012 was one that showed brilliantly in the Pacific and much of the USA.  It was due to finish about ten minutes after sunrise where I was.  I checked the weather forecast carefully, because really, the only place I could see the sunrise at real sunrise time (as opposed to five minutes later when it got above the trees or hills) was about an hour’s drive away on the coast.  The forecast wasn’t good.  I woke up, checked the weather, and went back to sleep.  Full cloud cover, as forecast.

I’ll give an ecopy of a Princelings series book or the BookElves Anthology Volume 1 to the first three people to comment.  Just say which you’d like and which format (mobi for kindle or epub for others)

14 thoughts on “Transit of Venus”