The only things these books have in common is their target audience and their enjoyability!

The Shadow of Camelot is the sixth in Wendy Leighton-Porter’s Shadows from the Past series, and is a historical time-travelling kidlit story.  It’s a Kid Lit Bog Hop, since it’s set in the wilds of Somerset, in about 600 AD.  Plenty of marshes, low hills and wild Saxons marauding over the countryside, defeating the local tribes and heading for a bust-up with the famous King Arthur.  It’s not quite the Arthur we might expect – he’s a bit stupid, really, and would like to call the fantastic sword Jemima (with Max’s help) has acquired for him something like Pointy!

Jemima, of course, is Jemima Lancelot, who with her brother and friend, and the inimitable Max, a mighty warrior of a cat in his own right, has come back in time – whether through their own magical book or Merlin’s magic is a moot point, and doesn’t really matter.  I see you’ve already guessed that Sir Lancelot (who pronounces his name Lonselow) takes them under his wing as long lost family.

Wendy Leighton-Porter has done a great job of weaving the kids into the Arthurian legend without too much interference with existing tales.  It’s not as strong a story as the earlier tales, but it is very well done, and the characterisation, especially of Max (who’s a bit of a wuss, really) and the newcomers to the episode, is first class.  It’s a quick read, which I welcomed as I was at Camp NaNo, and engaging right the way through.

Highly recommended to fans of the series, new and old (and young and old!)

The Shadow of Camelot (Shadows from the Past no.6) by Wendy Leighton-Porter 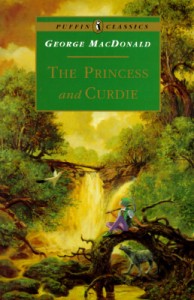 The Princess and Curdie is a historical book by George MacDonald dealing with fantasy kingdoms and magic gone wrong.  Historical because it was first published in the 1880s.  As such, the language can be more challenging, and is far more discursive than modern Kid Lit.  It’s designed for children who like words, and who like the way concepts can be described in words, and especially when that leads them to think about things.  In my post on things I liked in the books I was reading I highlighted a passage, which was breathtaking in both its simplicity and its depth of understanding of human nature.  Ageing in particular.

This should not put off modern readers.  The story is a quest to find a missing person, or at least to rediscover a missing person (the Princess) and once found, Curdie has to tackle a huge range of tasks in order to set things to rights.  This includes finding out who’s poisoning the king, learning who can be trusted, encouraging people to do what’s right, and not what’s easiest, and a host of other life lessons.  It’s of its time, but still a really good read.

I think Princess and the Goblin is better – or maybe it’s just less predictable.

The Princess and Curdie, by George MacDonald

Tagged on: George MacDonald    kidlitbloghop    Shadows from the Past    The Princess and Curdie    Wendy Leighton-Porter