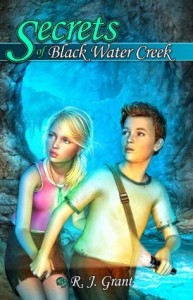 The Secrets of Black Water Creek, by R J Grant, has been sitting on my kindle for quite some time, as I got it free, probably in a Kindle giveaway.  I haven’t seen much in the way of promotion for it since then, but that doesn’t mean it should be allowed to sink below the surface of the lake that the creek flows into!

It’s time for summer camp, and Michael and Maxine want to do more than just the ordinary stuff.  They want to explore Black Water Creek, and the only way to get a canoe to take across the lake is to resort to subterfuge.  The rumours of mean and nasty hillfolk living up that way doesn’t deter them, and the fact that Michael has grown to realise that girls are somehow… different,  doesn’t stop them setting off in the same old way they’ve always done, full of bravado, sensible things like torches and water, and a good deal of friendship.

It’s written in a story-telling style, as if Michael is telling it to his own children many years later. It’s stylised but great fun, with a fair number of scary moments, and the adventure underground is beautifully imagined. Kids will learn lots of useful tips about the wilderness from this book.  Not least that you should never go exploring with a battery-powered flashlight – wind-up torches prove superior once again! 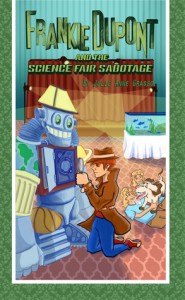 Frankie Dupont and the Science Fair Sabotage, by Julie Grasso, had by contrast been on my kindle for less than a month.  I bought it (much to Julie’s surprise) with my own fair hands, having received the first two books free – it’s the third of Frankie’s amazing private eye adventures, and definitely a good one.

Someone has sabotaged his brothers’ fantastic robot by stealing the computer component that will make it work.  The day of the science fair is upon us, and the only way the brothers will get to science camp is by winning the competition.  Who has stolen the chip?  Frankie’s discipline in interrogating all the suspects is admirable, despite pressure from all sides to make a hurried decision.  But no!  Frankie will not be hurried!  And fortunately friends help out to ensure that…. sorry, my lips are sealed!

Another great romp with Frankie and friends, and I love all the inventions that are presented for the fair, some brilliant in their own way, and some completely barking mad!  Lots of lovely twists.  Well done, Julie!

PS.  Book 4, Frankie Dupont and the High Seas Heist is already out.  I can’t keep up.