This isn’t really flash, it’s an excerpt.  In honour of the launch of White Water Landings on Tuesday for Nook, Kobo and iPad, (more details on Monday, including a special offer), I’m giving you a story from this memoir of a young man (my father) working for Imperial Airways in Africa in the 1930s, setting up the stations for the flying boat operation between London and Durban.

Here, 22 year-old Geoffrey is in Lindi, off the east coast of Africa – not Malindi, as some writers have mistaken it, but further south on what was the Tanganyika coast, close to what was then Portuguese East Africa.  The route for the flying boats was from Port Bell (Nairobi) via Dar Es Salaam, down to Lindi, and then onwards.  It was just a refuelling stop; my dad did not have to manage the passengers, like he did in other stations (which give rise to some very amusing stories).  It’s just a few weeks after the flying boat service has started, in 1937,and there are some unexpected difficulties with the locals….

We were in the little offices we had originally; we got our radio pack set up and got our aerial up on the coconut tree across the track outside, and we were able to work the aircraft all right and that was fine.  But one day the police superintendant came along to me and said how’s it going, and general pleasantries, and then: ”I’m afraid I’ve got trouble for you.”

“Well, apparently the tree that you’ve got your aerial attached to, the fellow that owns it is complaining that you’re killing the spirit of the tree.”

It was the screeching and the horrible 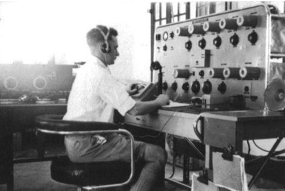 noises as I tortured the tree before I killed it.  So he was trying to get the police superintendant to get me to abandon my work against his tree or alternatively I would have to compensate him for killing his tree

I explained to the police superintendant that obviously the noises were the atmospherics that he’d heard. The dits and dots and dashes that the operator was sending out were obviously in our office and nothing at all to do with the tree, but somehow we’d got to pacify this fellow.  I thought that maybe we could do it by showing him how clever his tree was and with our wire attached to it, the tree could talk to the aeroplane.  The aeroplane to them was a bird flying in the sky and something great, so I thought this might work.  With the police super’s help, we got the owner of this tree (it wasn’t a very important local chief or anything like that, he was just a tribal member of the area) and he told him that he would be able to witness this.

On the day there was a flying boat coming in we got our radio operator to get in touch with the plane’s radio operator to ask them if they would shoot off a couple of Very lights as they flew over the landing area just before they circled and landed. I said to tell the skipper that it would help me solve political problems on the ground if he could do it.  We got a message back very soon saying ok, one red and one white.  So we then said to the owner of the tree that his tree had taken our message to the aeroplane and we would have to see what the aeroplane did in way of an answer – we didn’t tell him exactly what we had asked for.  We waited until the plane flew over the alighting area and sure enough, as she flew, out came one Very light and then another Very light.  This was terrific, he was absolutely thrilled with it.

After landing, I explained to the skipper why I’d asked him to do this, and he thought it was a jolly good idea.

“Have you solved the problem,” he said.

So, off he went and then I had a word with the police superintendant.

“Are we still in trouble?”

“No, no, no,” he replied.  “He thinks that’s lovely, he knows his tree can talk to the aeroplane, it’s absolutely marvellous. But I should be careful because any minute now he’ll come back to you and say ‘since it’s my tree talking to the aeroplane can I send a message to the aeroplane,’ so watch out for a further approach!”

White Water Landings is available for pre-order for Nook, Kobo and iPad from Smashwords, and launches 1st September.  It is also available now for kindle, in paperback, and hardcover from Amazon.com

2 thoughts on “A Non-fiction flash Friday: The Radio Tree”