I received an ARC of The Rosetta Man by Claire McCague from LibraryThing as a First-read, and it certainly lived up to my expectations from the description! 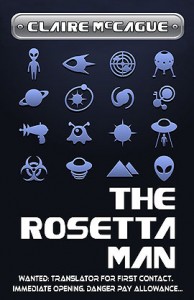 “What makes The Rosetta Man stand-out? An unusually dense squirrel population for sci-fi. It’s light-hearted, accessible sci-fi with exotic present day settings and a pair of aliens who are focused on observing the revealing chaos their visit creates.” – Claire McCague

Estlin Hume lives in Twin Butte, Alberta surrounded by a horde of affectionate squirrels. His involuntary squirrel-attracting talent leaves him evicted, expelled, fired and near penniless until two aliens arrive and adopt him as their translator. Yanked around the world at the center of the first contact crisis, Estlin finds his new employers incomprehensible. As he faces the ultimate language barrier, unsympathetic military forces converging in the South Pacific keep threatening to shoot the messenger. The question on everyone’s mind is why are the aliens here? But Estlin’s starting to think we’ll happily blow ourselves up in the process of finding that out.

I’m not so sure of the light-hearted element of Ms McCague’s summary, but maybe I took it too seriously.

A man who has a serious problem with human relationships, but who squirrels describe as ‘shiny’, is ordered by an ex-colleague to take the transport he’s ordered for him and come down to New Zealand for a big job – with a paypacket he can’t refuse.  In drops a harrier jump jet with an attractive British pilot, he gets a cool ride to a US transport, and ends up in a film set in Wellington, where most of the world’s navies are assembling – thanks to some odd goings-on that caused a satellite black-out a few days ago – and Greenpeace, whose attention to the nuclear element of said navies is acute.

An ex-colleague of mine has just been made joint International Executive Director of Greenpeace, and I’d like to wish her (well, both of them) good fortune in all the things we value.

Back to the book: this is a fast paced story with many strands and lots of characters, which as you know I sometimes have difficulty with.  The central part of the story is so intriguing, so well written, and so vivid, that I forgave myself when I got lost with the complexities and just carried on regardless.  I suspect a re-reading would be beneficial and I’d enjoy it even more.  Most of my confusions are down to being unfamiliar with the pet names for various types of military hardware, and I was more at home with the vagaries of the swarms of animals that helped track Estlin (our hero) across the Pacific.  I mean, can you imagine it – message from the coastguard:  I don’t know what’s going on, but we’ve got ten thousand rabbits crowding the cliffs looking out to sea. Add bats, cuttlefish and Russian squirrels with tracking devices…  Yes, I suppose light-hearted does come into it, but it’s hell for Estlin.

At the heart of it all is the fact that he, almost alone in the world, can communicate with the aliens that selected New Zealand as their place to make the world aware of their existence.  There’s some serious maths involved in the description of how they got here, a theme that wends in and out of the narrative, helping to prove that Estlin really is communicating and not making it all up.

By the time I finished, I wished I’d read Ms McCague’s bio, or I’d have realised I could be out of my depth earlier.  Daytime job, nanotechnology.  If I don’t keep my IWSG head on, I am going to be seriously dissuaded from doing scifi books, since my science knowledge is stuck around 2000.  Either that or I’ll have to check out some new grad-school science books.  But no, I can go with what I know and can invent, just as Ms McCague does.  But it’s brilliantly written, with fabulous descriptions of the communication methodology, and overall, seriously good.

With a man who talks to animals, rather than people.

And now for a special announcement! 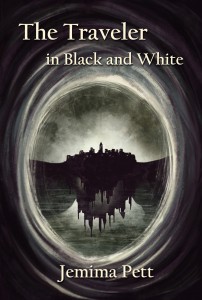 The Traveler in Black and White will be on Author Shout’s Cover Wars from tomorrow till the end of the week.

Please stop by and vote for Hugo (Lord Mariusz) as he does battles with his foes.

Vote every day, if you can – thanks!

9 thoughts on “Book Review | The Rosetta Man … and Cover Wars!”