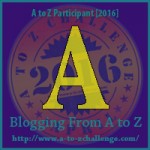 Greetings, A2Zers everywhere, as well as to my flash fiction followers.  It’s April 1st, and no fooling, it’s the A to Z Challenge again.

Since I’m also doing Camp NaNoWriMo, to help me get through my writing schedule this year, I thought I’d take a theme of world-building, since one of the books I’m writing is the second in my Viridian System science fiction series.  The second thing I learnt about writing galactic-based science fiction – you don’t have to invent one world.  You have to invent a WHOLE LOAD of them.  Just in the first book, The Perihelix, my asteroid miners (based in the Viridian System) visited Bartelski, Balkh, Brahe, Farsight, and Nusa Dua and talked about Telemann, Febelroux, Tesla, Aldebaran, Corsair, Ulric, Paradisio and a dozen more.  I think I’m a glutton for punishment.  So the plan is to feature other worlds through the month of April – mine and other people’s.

The normal pattern for my blog is to have a general post on Mondays, Flash Fiction on Fridays, and a book review on Saturdays.  Other days anything can happen.  I’ve managed to get half a dozen interviews with other world-building authors out there. Various features have to fit in, like the #IWSG next Wednesday and the #Fi50 later in the month.  And to keep things straight, all Friday posts will be flash fiction of 500 or 1000 words, featuring one of my worlds, and all Saturdays will be book reviews featuring worlds beginning with the letter of the day.

So, to kick things off, here’s what was intended to be a 500 word flash fiction featuring Alpha Kenworthy, a world controlled by the Federation (see F), that crops up a lot in conversation in the books so far.  I just got carried away and did a more usual 1000 word story instead. This may be the incident referred to in Chapter 2 of the Perihelix.

The Appeal of Alpha Kenworthy

Lars Nilsson, otherwise known as the Swede, sat in the starting hoop with his flyer’s engines burbling behind him, hot and ready.  The Swede was hot, but not ready.  The Alpha Kenworthy race was a big prize, the only reason they’d risk visiting a Federation planet; well, the prestige overtook the shame of non-appearance. Flyers came from all backgrounds.  There had never yet been a risk to them when racing in another regime’s space. Lars glanced forward towards the front row of hoops, where ‘Big’ Pete Garcia hovered dead centre in his hoop, tuned in to his machine, ready to race; in the 2 hoop was the black craft of the Pavanian, Exo Madras.  The other side of Pete floated the green and white G’Naussian craft.   He could see the makeshift repair to the G’Naussian’s outer flange.  He doubted whether it would hold.  Satisfaction didn’t overcome Lars’s anger at the demotion to the fifth row of the grid. Lars shrugged.  He had a few seconds to clear his mind, or he wouldn’t overcome the disadvantage of his position, either.  He gazed into the whirling blue-green of his engine status screen and concentrated on focus.

So much so that he missed the start completely.

As the three starting behind him zipped past, he pressed the sinking feeling that he was an idiot firmly into his stomach, and let it dissipate along with the thrust into the seat as he finally let his flyer go. They could consider it his final protest.

Away under the arch at the end of the arena, he made a left turn, instead of the right that all the rest had taken.  The course had waypoints, not a track, so it was perfectly allowable.  The question was whether this last-minute choice was bad judgement or genius.  Pete was on the standard route.  They usually raced together, to protect each other from dirty tricks.  Today there would be no catching Pete up, unless Lars found a spectacularly fast alternative.  Alpha Kenworthy was rock and jungle at this line of latitude, and most flyers would be avoiding the jungle.  You never knew when some creepers or tendrils were going to catch your path and, at speed, they could cut like razor wire.  Lars and Pete had reckoned a line that might just be clear enough to risk – in an emergency.  To Lars, this was an emergency.

The twin gum-like trees he’d spotted as sentinels to the alleyway in the forest stood tall and proud at the edge of the grassland.  Aligned and holding his height mere metres above the ground, he tensed as the trees whizzed towards him; through and shifting down a dark green tunnel of vegetation, he twitched the controls left, right, and flipped ninety degrees and back, time and again, to slip through the gaps between trees and tendrils alike.  For a few seconds he was running blind, and then there was light, the Kenworthy sun reflecting off the marble cliffs they had to dive through to the waypoint in the centre.  The big question – was the tunnel entrance this side accessible?

Judging from the shriek of metal as he slipped from bright light to full darkness it was – just.  The flyer had adjusted its own path to compensate for the connection, and had augmented the display to allow Lars’ eyes to have full view ahead. He needed it.  Marble, limestone, they all grew strange pillars and posts within their cavernous openings, and he adjusted his intended line as rosy rumpled stone blocked his route.  Only a few further adjustments were needed before he emerged into the main cavern, the Cheddar Gorge, as it was called here, although the only reference he’d found to Cheddar was a form of cheese.  He spotted lights on walls ahead, and many more behind; he’d caught up, but not overtaken the field.  He joined the group to find the way out of the mountain, and reckoned he was now fourth or fifth, unless someone had got well ahead.

“Pinching,” was the reply.

These asteroid miners had their own shorthand for every occasion.  Lars had told Pete he was close to the front group, Pete replied he was pinched between other flyers.  In this tunnel all they could do was fly; Lars reckoned Pete’s was the second flyer ahead.  They took the right hand bend of the tunnel in a screaming stoop and emerged into daylight once more, skimming over the forest, lurching to the side to avoid flying creatures disturbed by their passage.  Now it was just a question of outflying the other contenders.

Ten minutes later, Lars swept into the arena and found his hoop a split second before the G’Naussian and Pete found theirs, the G’Naussian having flown across Pete on the last dive in, forcing him to ease off at the most critical moment.

“Objection: Stewards Enquiry” was repeated after the klaxon announcing all bets were on hold until the result was official.

“Who’s asked for a Steward’s Enquiry, for Sirtis’ sake.  This is a flyer’s race not a smirking tea party!”  Pete was as unhappy as Lars at the announcement.

“You can appeal,” said the chairman of the stewards, smiling at them as he walked to the champagne room.

They seethed all the way back to their spacecraft, where they opened a couple of beers and toasted their success.  Moral victory.  They’d been robbed.

Come back for more flash fiction, each Friday, all year round!

A is for the #AtoZChallenge #FridayFlash World-building Mash-up