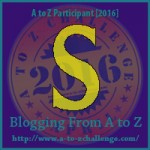 S is for Sunset Strip, the binary planet of the Viridian System whose major industry is leisure and tourism. Whenever I write flash fiction for any worlds in the Viridian System at present I’m always thinking of what I’m writing in the second book, and some of these stories may turn into scenes in that, or later books.  This one picks up on the story of a few weeks ago Balancing the Buks, which in turn fit elsewhere in the backstories, but if you’re following my world-building A to Z you can just stay with this exposition of Sunset Strip and its politics.  It’s just over 1000 words.

The slightly green-tinged sun made Sunset Strip’s skies more azure than blue, but the colour display as their star slipped below the horizon was often spectacular.  Since it was a small planet with a fast rotation, inhabitants, whether permanent, tourists or vacationers, experienced two sunsets in a standard day.  Not that the Elders were paying any attention to it during their bi-annual forum.

“How long have they been there?” was the question on everyone’s lips.

So far it was a well-kept secret that a third settlement had been established on the planet.  The second, a religious sect seeking privacy to worship as they saw fit, and in particular to eschew ‘modern’ technology, had approached the Elders some twenty years back.  The Mishans had moved in, a third of a world away from where Sunset Strip’s beach resorts provided all of the economy needed for imports of high-tech goods and off-world culture, and they kept themselves to themselves.  If they were still there, as one Elder commented.

Now the new sensor system, installed after an unfortunate incident with a Federation vessel, had indicated a third community, located on the opposite side of their own continent, half a world away.

“How did we detect them, anyway?”  Paris Strongarm was the grandson of one of the early settlers, and had invested heavily in the new security system.

“It was an anomaly in the sensor network during testing.  We sent someone to check it out. Hence the ‘eyes only’ report.” Tylene Smithson had taken over as Chair of the Council after her husband’s death.

“Someone being one of those miner chappies, I suppose.” Arthur Grantworthy sniffed.  He was not in favour of the invitation to join the Elders that the rest of his colleagues were so keen to extend to the two rich asteroid miners.  Even if they had bought the villa and land surrounding it at the end of the Point.  “Where are they, anyway?  The villa seems abandoned.”

“They went vacationing while the builders were in,” Smithson responded.  “Zito is their agent, he keeps an eye on it.”

“Last time they left one of their women there,” Grantworthy sniffed again.  “Have we not found out anything more about these interlopers?”

“We have.  If you have no further comments, I suggest we bring in Zito to tell us what he has found out, discreetly of course.”

General mutters and murmurs indicated they were ready for Zito, owner of numerous enterprises on the companion planet Paradise Valley, fixer of many things, and agent for even more.

“From visual inspection there is a small dwelling of pre-fabricated nature, and the signs of quarrying and timber management to build these three other buildings of undetermined use,” Zito explained, showing them a grainy holo of the site.  “I didn’t want to risk upsetting them, so apologies for the long range view.”

“It’s hardly an invasion force, then,” said Paris. “Looks more like a refuge.”

“That was my assessment,” Zito agreed.  “I took the liberty of investigating arrivals on PV over the period in question.”

“Not more than one orbit, from the general disturbance of the land.  More than a season.  So I checked out anything that looked odder than usual, and found three or four arrivals, all of whom departed soon after.  Two seemed more interesting, and I checked on them with the Exchange.  Given the requirements the Exchange have for privacy, I can tell you little, except I believe they do not in themselves provide any sort of threat to our stability.”

“Not an Imperium base, then?”

“Could the Imperium be after them?” Smithson cut to the point many feared – anything that drew the attention of the Imperium to the Viridian System.

“Yes, they could.  But we have an increasing number of residents who the Imperium are probably after.  And as I reported last time, someone is buying land on PV to claim an Imperium presence in our Council.”

“We must get rid of these people who attract the Imperium’s attention!” Grantworthy jumped to his feet, staring at his colleagues.

Strongarm sighed. “We accept the Imperium as tourists.  What if we stop them? What would happen then?”

Smithson nodded. “You’re right, we have to manage the few Imperium spies that come here.  And the Federation ones, too.  But our defences are so slight, as we discovered.  Where are those miners, Zito?  Have you told them of our interest yet?”

“They are out of contact range at present, but you should know that we are hoping to get them on our Council.  They have land at PV too.”

“I thought they only had the villa?”

“They’ve recently acquired that patch of land that the Amberson trophy uses.  I think they enjoy the idea of owning the racetrack, and were keen to prevent anyone else dictating terms.”  Zito was not about to reveal that he had bought it on the miners’ behalf, since they had disappeared leaving him with their huge fortune to control.

“Well, we have prior call on them – they got the villa first!” The owner of the beachfront bars was adamant.

“Yes, and when they get back, we can authorise them to take a flyer over to the newcomers and check them out.” Grantworthy’s stare challenged the others.

“We can co-opt them onto our Council, can’t we?”  Grenita Farmint, from the residents’ association in the farmland, checked the process.

“Yes, our rules allow us to do that.”

“Well, then.  As soon as they get back, we get them working for us.  Can we wait till then?”

“We’ll have to, I think.  Do you think the settlement is a threat, Zito?”

“Not in itself, no.  I wouldn’t be surprised if it turned out to be a refugee camp for some rebels, though.”  Since Zito had garnered their identity from his contact at the Exchange, he wouldn’t be at all surprised.

“What if the Imperium come?” asked Grenita.

She voiced everyone’s thoughts.  What in heaven’s name would the two quiet, backwater planets of the Viridian System do if the Imperium invaded?