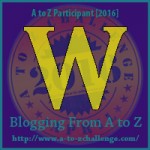 Windemere: A place of magic, of dragons, of evil beasts that live under the earth and rise up to snare the unwary, of desolate wastelands, and green fields and forests.  A good place for my W post in my world-building trip for this year’s A to Z Challenge.

Beginning of a Hero, the first book of the Legends of Windemere by Charles Yallowitz, starts with a young would-be hero, who is a half-elf with a famous name that he’s trying to live up to, and his dog, meeting a real live hero – who’s half dead.  He passes on his quest to the half-elf… not without help from some magical creatures, but the reader is allowed an insider’s guide to the evils that lie beneath the earth, and the many and varied creatures he uses to achieve his evil ends.  Meanwhile, our would-be hero trots off to an academy run by a retired hero (female), to protect the heir to the major city whose identity he doesn’t know, but whom he knows will be the target of an assassin, whose identity he also doesn’t know, on account of both missing bits of information having been on the dead knight’s scrolls which met with an unfortunate accident before would-be hero could read it.

With me so far?

It’s an engaging premise, and a fun-filled, well-described romp through magical lands and feudal kingdoms.  It’s a page turner, which I dropped for a bit when the dog met an untimely end, and partly because the three women involved are irritatingly two-dimensional, despite the author’s intention (as I see it) to make them feisty.  Luke’s friends (sorry, would-be hero is called Luke) are a varied lot too, with lots of half-creatures involved.  Fizzle is a tiny dragon, and probably the most memorable of all.  He has a cute way of speaking, too.  I think this is a book that will appeal most to gamers and RP enthusiasts; I think when I got confused about people it was because of various abilities that are taken for granted by role-players.

It’s a robustly built world, with all the fantasy and magic that goes into such a place, which occasionally leads to things being able to happen that wouldn’t make sense elsewhere.  I am glad to say that the author was willing for me to interview him about it, so welcome Charles E Yallowitz!

What did you set out to achieve when you invented Windemere?

Legends of Windemere is actually based on the college Dungeons & Dragons game that I was a part of.  So the world is very similar to that setting, which is heavily influenced by Tolkien’s Middle Earth.  Growing up with these stories, I found myself creating a ‘medieval’ setting out of instinct and that created the foundation.  Since the stories and characters came first, Windemere originally was designed around them instead of the other way around.

As the series progressed, my goal for Windemere changed from setting to making more of a living, breathing world.  I wanted people to see that it is a magic-heavy world that has a lengthy history.  With every book, a new landscape was introduced along with revisiting old ones that showed evidence of change.  For example, an incident happens in the second book, Prodigy of Rainbow Tower, and the fallout causes an entire city to change by the time the heroes return in the fourth book, Family of the Tri-Rune.  The goal is to reveal that Windemere is always evolving and bigger than the adventure you’re seeing now.  A big reason for this is that nearly every series I write is going to take place in Windemere and I want to make sure people get a sense of the scale.

I’d like to think I achieved everything, but I don’t know if the last part comes off as well as I wanted.  It isn’t easy to hint at future stories and lay the groundwork for events that will involve new heroes.  This might be because I’m doing foreshadowing that won’t be revealed until I write the connected adventures.  Now, I do feel that I created a large world filled with multiple cultures, locations, creatures, and a long history.  Even better, there is an organic flow and connection between everything.  This means that a reader can see how each piece fits into Windemere.

I understand that – it’s an issue I have with the last two books of the Princelings series.  What was your favorite aspect?

Can’t get away with saying everything, can I?  The truth is that I love the world building, character designing, and monster creation side of writing fantasy.  When I couldn’t write full books due to time constraints, I’d carry a small notebook to do these three things and flush out what I wanted.  So if I had to choose one aspect of world building, I would have to say the sense of exploration.  To me, I’m not only forging Windemere, but searching this large world and sharing my discoveries with my readers.  Many times, I’ll be sitting at the laptop with a new area, close my eyes, and let my imagination wander to what I need instead of forcing the locations to materialize.  Probably sounds weirder than it really is.

Oh, I don’t know – sounds normal to me! What didn’t work, or not in the way you expected it to?

Nothing has really backfired with the world building beyond a few unique cultures getting some complaints.  Anything traditions that deal with sex or marriage tend to come under a lot more scrutiny than I realized.  I’m not really sure why.  Beyond those issues, I never had much of a problem with world building failures.  I do a lot of outlining before I start writing and I take time in the morning to look over the chapter I plan on writing that day.  There are a lot of things that change while I’m working on the book, but it’s usually my thoughts correcting themselves as I move along.

Of the elements of world-building (physical, social, technological, political, cultural) which do you think is most important?

Might have to put all of them into a hat, choose one, and wing it.  Seriously though, I see world building as a tapestry where every element is necessary.  Faltering on the physical setting can hinder the impact of political and cultural sections.  Ignoring the technological side can cause problems when you introduce an object with social impact.  I think you really need to treat all of these parts as equals to get a fully fleshed out world.

Thank you so much, Charles, that was terrific.

Visit the world of Windemere by purchasing Legends of Windemere: Beginning of a Hero Free on Amazon and Smashwords.

Every hero must take the first courageous step into adventure. For Luke Callindor, it’s more of a blind stumble.

Depending more on bravery than common sense, Luke sets out to protect a royal heir who is attending the prestigious Hamilton Military Academy. With a demonic assassin in the shadows, the determined warrior will have to think on his feet to defend his charge. If only he waited long enough to find out which student is the hidden noble.

With Luke’s dream on the horizon and a deadly enemy on his path, how will he transform from a reckless adventurer to a true hero of Windemere?

Charles E. Yallowitz was born, raised, and educated in New York. Then he spent a few years in Florida, realized his fear of alligators, and moved back to the Empire State. When he isn’t working hard on his epic fantasy stories, Charles can be found cooking or going on whatever adventure his son has planned for the day. ‘Legends of Windemere’ is his first series, but it certainly won’t be his last.

W is for Windemere #atozchallenge

10 thoughts on “W is for Windemere #atozchallenge”