How many books do you not finish each year?

I seem to go through phases; I don’t know whether it’s what I’m reading or how I feel about the book and other things I have to do.  Sometimes the book has something that irritates me; sometimes it’s written in a way I find too much like hard work, other times I feel I’d like to keep working at it, but … later.

I’ve not finished three books so far this year.  Two of them were bookclub books.  Sometimes the fact that I need to read it to talk about it at the next meeting keeps me going and I find it was worthwhile finishing it (The Miniaturist was a case in point).  Despite reviewing The Night Circus, I gave up on it about a third of the way in, because the irritations kept mounting up and I found none of the characters really worth engaging with – except for the engineer chap, and when I said that at the meeting I discovered (spoiler alert) he was killed in the next chapter after I’d stopped!

I also gave up on Helliconia Spring.  I think I said as much in my review, which was part of the world-building theme, and I had enough world-building to write about from what I’d read.  I enjoyed the first part, but it shifted to later in the planet’s history and featured incredibly stodgy legends to link up the past with the present.  So many names – I got bored.  I think I’d probably dipped into it when it first came out and decided it was stodgy then.  It hadn’t changed, and neither had I.

Now I’m nearly giving up on The Paying Guests, another bookclub read, but which I proposed.  This surprised me, since I was at an event last year where Sarah Waters read from it.  I recognised the passage, remembered what she had said about writing gothic literature – the details, the smells, the creation of atmosphere, especially darkness.  I love the way she writes.  I admire the way she writes.  But I realise that, as with Fingersmith, it’s an LGBT genre which is going to twist and twist and, frankly, I don’t want to read it.  If I change my mind, I discovered I’d acquired a paperback copy (probably from our book exchange shelf), so I can always go back to it.  But for now, it’s off the ‘currently reading’ shelf. 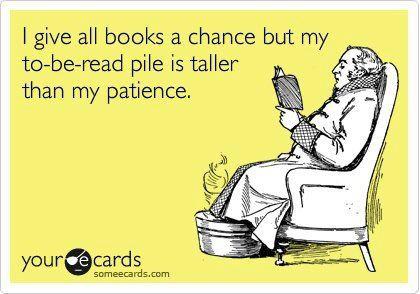 Then comes the big problem – is it going back onto the ‘To Read’ list?  Or is it consigned to the ‘unfinished’ shelf of the ‘Read’ pile?

Bruce Gargoyle made a lovely post about this dilemma recently.

He said he’d only recently become comfortable with the idea that he didn’t HAVE to finish every book that he started. But he does get more NetGalley books than I do.  He also said:

Then I came across this mind-blowingly sensible article from Anya (On Starships and Dragonwings), challenging us to consider making the DNF our default option for reading.  It would certainly save time.  Theoretically, it would ensure that we were only reading the books that we were really invested in.

So, should we make ‘unfinished’ our default option for the books we start?  With the number of books out there it would make life easier, not thinking we have to continue to wade through things we don’t actually enjoy (in whatever horrible way we might ‘enjoy’ things).  I would suggest that for anyone with a GoodReads Challenge of over 50 a year, or maybe a TBR list of over 100, then DNF should be the default.  Otherwise I’ll never get to those wonderful books that just came out too late to get further up my list.

It might also help authors more if they find their books are being DNF’d, rather than given 2 and 1 star ratings.  Our stats could help them work out what’s wrong with their book (provided we fill them in, which is only kind).  “Progress 12%, unfinished shelf” would tell me a heck of a lot about those first 12% of my pages.

Pictures: header from google images; cartoon from someecards.com via kindlesandwine.com

11 thoughts on “The dreaded DNF”