Remember Rosetta, the mission to investigate the Comet 67P/Churyumov-Gerasimenko?

We were terrifically excited with the launch of the module, Philae, that landed on the comet as it approached the sun two years ago, only to have it seemingly disappear.  It turned out to have bounced on the surface when it landed, and catastrophically ended up on its side in the shadow of a ‘crag’.  Some months later the rotation of the comet as it neared the sun finally let the solar panels charge up and send some photos back to the mother ship, Rosetta, which has been running alongside the comet ever since.

Rosetta was launched in 2004, and after a couple of slingshots and gravitation assisted adjustments, went alongside the comet successfully, sending us back some super photos, both of the comet and of the little lander leaving. You may have seen, a few weeks ago, the scientists examining the wealth of photos it has taken finally located Philae in a ravine.

The comet rounded the sun, and is now disappearing out towards Jupiter. Mission control has determined that because the power will start to fail, Rosetta will spiral down into the comet this Friday, 30th September, taking pictures as she goes.  It’ll take 40 minutes for the pictures to get back to mission control, and when they stop, we’ll know that for Rosetta, the mission is over permanently.

For more detail, see this notice from Earthsky.com.

Pictures here are from ESA via Earthsky.com 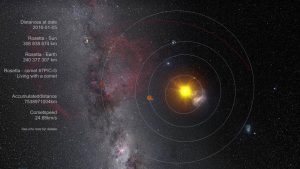 Click this copy of the header picture to get a better view of the marked orbits of Mercury, Venus, and Mars with a red line showing the path of the comet and Rosetta (enlarged visual of the comet at about ten o’clock.), or go to the Earthsky.com page for a better view with notes.