A double review today, two Middle Grade books, very different in style, which is an interesting thought about the difference between current expectations and those of the 1960s, which are, after all, fifty years ago. 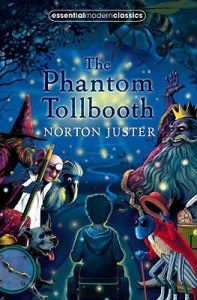 In this classic children’s tale, Milo sets off through the tollbooth he finds in his bedroom and away on a magical journey to such places as the Land of Expectation, the Mountains of Ignorance and the Castle in the Air. He meets the weirdest folk, such as the Threadbare Excuse, who mumbles the same thing over and over again.

This has been on my radar for a few years but I was surprised to discover it was out when I was (just) inside the MG age group.  I can understand why I didn’t read it, if I knew of it then.  It has a studied, old-fashioned style, old-fashioned even for the 60s, which at first put me off, but then I grew to enjoy the absurdity of the quandary the world beyond the Tollbooth, and the adventures Milo has to solve it.  The people and philosophies addressed in the story are just right for brighter kids exploring the whys and wherefores of the world, and I’m sure it is hugely popular with the right bunch of kids.

Very old-fashioned style, along the lines of Prof Branestawm in manner, which probably is why I didn’t read it when I was the right age.  But it got me laughing at the puns and word play, and then I settled down into it rather more.  I can see why it’s still a family favourite.  Worth the ‘classic’ tag. 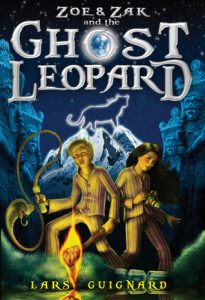 Zoe & Zak and the Ghost Leopard

Imagine you’re totally lost in a strange city with no idea where you are and no way home.
Now imagine that elephants and snake charmers start telling you that you’ve been chosen to save the world.
Would you even believe them?
What would you do?

Zoe Guire isn’t sure. Having that elephant talk to her was really weird, and, as a rule, Zoe doesn’t do weird. Except the thing is, when Zoe goes along on her mom’s business trip to India, things get very weird, very quickly. Soon after she arrives, Zoe finds herself tagging alongside a kid named Zak, lost in a crazy city, with no money and no way home.

And those are the least of Zoe’s troubles. Because if she’s to believe the scary-looking snake charmer guy sitting in the corner, she and Zak have been chosen — chosen to protect some kind of mythical animal called the Ghost Leopard from who knows what.

Now, the further they get into the mountains, the more crazily impossible things get. Carpets fly and statues talk and if either Zoe or Zak want to make it back to their parents, or the sixth grade, or anything even close to normal, they’re going to have to make some new friends, learn some new tricks, and listen, really listen to that talking elephant. Because if they don’t, the world will never be the same again.

Join Zoe and Zak as they journey high into the Himalayas to a place few have been and even fewer have returned to tell about it.

Back on safer ground for a cracking adventure story set in India.  I managed to start this series with book 3, and you can check my review of that here, but prior knowledge of Zoe & Zak does nothing to harm the story, indeed it’s fun to see them as they are thrown together for the first time.

The blurb tells the story well, and gives a flavour of the writing.  This is a rich, exciting tale, with plenty of hints and twists.  You may favour Zoe, or you may identify with Zak, but you certainly feel the thrills they go through.  I expect it helps if you have visited India, but I’m also sure that it gives you a great flavour of this wonderful country and its diverse people if you haven’t.

It’s a great book, easily worth five stars, and I’m looking forward to the Yogi’s Curse – book 2 in the series, soon.  Maybe I’ll even reread the third!

I realised the other day I had no need to squash lots of reviews in together – I could just stop reading so much, since I had passed my Goodreads challenge and most of the others.  So my reviews are now slotted in till the end of the year, and I am going to make myself relax a little more.