Welcome to my first Giveaway Hop of 2017.  It’s the Best of 2016, featuring the books that eventually emerged as my top five.  Thank you, Mary at BookHounds, for running this hop, and many other top events throughout the year (and over many years).  You truly are a star. 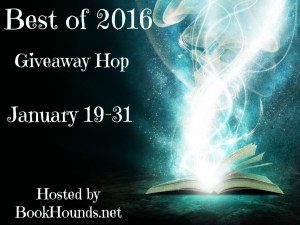 You may have seen me raving about my top books at the end of last year.  I slid another one in just before Christmas; it came out last week and I reviewed it on Saturday.  So the list has changed a little since I ran the Stuck in a Good Book Giveaway where I led with The Martian, and even, on reflection, from my Book of the Year list a couple of weeks back.

I hope there’s something in there that takes your fancy, since the winner of my giveaway will have a choice of one of them, in paperback or ebook as preferred (if available).

Entries are welcome from all parts of the world (if Book Depository doesn’t do free delivery to you, it’ll have to be an ebook if you win), and entries close at midnight (New York time) on 31st January.  Just enter via the Rafflecopter, then go hopping round other people who have signed up to tell you the best of their 2016.