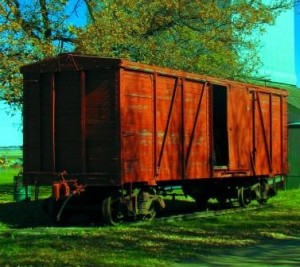 Chuck Wendig’s challenge this week was to face our fears: take a something we were scared of and use it as a basis for our story.  I’ve returned to one of my earlier characters for this one, Johnson, a hobo who spent a night in a freight-car and was never the same again, although maybe it was Lois that got these particular powers, I can’t remember.  I give you just under 1000 words for this week’s story.

Johnson sat on a rock in the desert, gazing out over the sparse scrub spattered with cactus standing to attention, signalling him to halt.  He was happy to halt.  The freight train had finally got itself going again after a night of solitary watchfulness.  The box car—where he’d spent four days since he jumped aboard at Greater Naples, growing increasingly irritated by the hum of the crate in the corner, until he’d stepped out into the desert—had gone.

He had jumped aboard; well, jumped, climbed and dragged himself over the threshold onto the gritty floor.  Apart from the crate in the corner, and several more stacked at the other end, it had been empty, save for a few spiders, including one surprisingly large one that lurked in the shadows above the stack.  He’d felt it observing him.  He’d hauled himself to the opposite end, until the hum of the crate made him move back to the door, gazing through the gap at the passing landscape till it stopped passing.

After twelve hours staring at the desert, he’d just stepped out.  Extended his leg, put his foot on the ground, and wobbled after it.  The leg had returned to normal size.  Now he stretched his arms, and found they had the same facility.  He reached for a lizard hiding under the sequoia and picked it up before it realised he’d moved.  Well, what lizard would expect someone his size to reach that far?

He spent several hours putting his body through contortions, testing his new abilities.  Then, after a few hours of howling, shrieking, crying and smashing his hands against rocks (painlessly since he simply could not achieve a solid crash), he relaxed under the dubious shade of the rock, finding he could shrink a little, too, although not to the same degree as his extension abilities.

When his shivering fit at the strangeness of his new body abated, he considered his future.

Several days later, he washed himself off at a tap beside an old gas station.  The water was brown, but only through rust.  The windows of the building were cracked and scored by blown dust.  An ancient old-timer tottered forward to greet him, shotgun across his forearms, just in case.

“East.  When did ya last seen anyone on the road?”

The old-timer shook his head.  Maybe he had, but he wasn’t sharing it.  “Give ya a coke, if ya wannit.”

Johnson wanted it, took it with thanks, and set off along the road.  He topped the rise and got down in a gully the other side to be out of sight.

Under cover of darkness he went back to the gas station.  As he half-expected, the old man locked up when he retired for the night, but Johnson saw the louvred windows of the toilet facility and let himself in.  He slid through the slats, slithered onto the floor, avoiding the less clean facilities, and let himself out of the door.  The old man’s snores almost drowned the sound in the distance that made Johnson pause.  As it grew louder, the old man snorted and woke.  Johnson slithered to front counter of the station, acquiring several packets of cookies as he went. The old man went past, unlocking the door, putting the lights on over the gas pumps, and illuminating the old logo.  Nobody was going to miss the opportunity of a refill.

The beat-up truck stopped. The driver swapped a crate of beer and a sack of corn for a fill-up.  Johnson slithered into the cab and made himself comfortable on the floor behind the seat.  The driver returned, shoved the truck into gear and set off again.

Johnson repeated the procedure in reverse when they finally stopped at a city near the lakeshore.  He’d spent the journey considering both the possibilities and the dangers for his new body.  He had to check out exactly what threats he was up against. He sat on the sidewalk overlooking the lake wondering whether he could still swim.  He could step on firm surfaces, sure, but would his body deform if he tried to wade through softer things, like it had against the rocks?  The only way was to test it.

He went to step on the boardwalk, thinking to go out to the end and dive in, when he saw the gaps between the boards. An old fear paralysed him; the childhood fear of slipping between the cracks.  It had stopped him going on piers, kept him away from fire-escapes, anything he could see through—anything that he might somehow, impossibly, fall through to his death, no matter how small the crack, or how large he grew.  It was as irrational as a fear of spiders.  But it was real to him, and it was even more real now.

Clenching his stomach muscles, he walked forward.  He stepped on the cracks.  He kept his feet firm, and continued walking.  Then he relaxed.  He stood astride the gap in the broadwalk, and put both feet on it.  He deliberately, steadily, relaxed his feet, and slid through the gap into the water below.

He was still laughing as he dropped into the water.

And found that, no, he couldn’t swim. But he could walk under water, extending his neck above the surface. Panic over.