This non-fiction book is one I got from Net-Galley nearly six months ago to review prior to publication – which is February 1st.  I confess when I saw the size of it I was a little daunted, and I should have got down to it earlier.  Once Christmas was out of the way it became my first priority – and happily the first book in my new Non-Fiction Adventure Challenge. 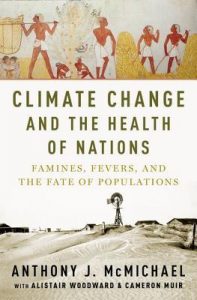 When we think “climate change,” we think of man-made global warming, caused by greenhouse gas emissions. But natural climate change has occurred throughout human history, and populations have had to adapt to its vicissitudes. Tony McMichael, a renowned epidemiologist and a pioneer in the field of how human health relates to climate change, is the ideal guide to this phenomenon, and in his magisterial Climate Change and the Health of Nations, he presents a sweeping and authoritative analysis of how human societies have been shaped by climate events.
… After providing an overview of the dynamics of global warming and the greenhouse effect, McMichael takes us on a tour of the entirety of human history, through the lens of climate change. …Climate-related upheavals are a common thread running through history, and they inevitably lead to conflict and destruction. McMichael correlates them to the four horsemen of the apocalypse: famine, pestilence, war, and conquest…. We can see this in familiar historical events-the barbarian invasions of Rome, the Black Death in medieval Europe, the Irish potato famine, maybe even the Ten Plagues-that had their roots in natural climate change.
Why devote so much analysis to the past, when the terrifying future of climate change is already here? The story of mankind’s survival in the face of an unpredictable and unstable climate, and of the terrible toll that climate change can take, in fact could not be more important as we face the realities of a warming planet. This sweeping magnum opus is not only a rigorous, innovative, and fascinating exploration of how the climate affects the human condition, but also a clarion call to recognize our species’ utter reliance on the earth as it is.

My previous career had me dabbling in pollution management, energy poverty, and things that led me into climate change related research – particularly in relation to how people could adapt to or prevent its impacts on their homes, health and welfare. During one of these phases I encountered a book called Pan’s Travail : Environmental Problems of the Ancient Greeks and Romans which raised the issue of over-use of land leading to desertification, but also considered altered weather patterns that hastened the problem. That had enough impact on me to attract me to Professor McMichael’s book.

In Climate Change and the Health of Nations, Anthony McMichaels starts by reviewing the issue of climate change, man-made and natural, and giving a two-chapter overview to bring your earth science up to speed.  He covers how weather is related to climate, how climates are related to the perturbation of the ocean currents, the natural emissions of carbon dioxide and other greenhouse gases, the effects of other atmospheric pollution, and the timescales over which major changes in carbon dioxide concentrations in the atmosphere (and hence the global temperature changes) occur and have occurred over geological timescales. He then gives a brief overview of how catastrophic failures of civilisations tend to occur – war, famine, pestilence and disease – since his concern as an epidemiologist is the effect of climate change on human health.

In this magnificent book, he addresses the impacts of climate on the evolution of the human, using archaeological and geological evidence, and brings us forward in stages, examining different ancient civilisations and the climate record.  Once we get to written records, the timescales start to shorten.  If, like me, your science outweighs your history, you are likely to be astounded by the connection between plagues you’ve heard of and know roughly when they happened, and variations in the climate such as failure of monsoon rains causing century-long droughts, and the Indonesian super-volcano, which would have caused a ‘nuclear winter’, coinciding with periods of intense cold and famine in northern Europe.  You may find it confusing with all the various tribal invasions, but the logical connection with shifts in weather patterns is repetitive and persistent.

I found the older periods easier to connect with than the post 14th century ones, partly because it was on a macro scale; the geographical spread was immense, with all civilisations in a three thousand year span dealt with in a not necessarily easy to follow way; I found the narrative jumped forward two thousand years and then back again on more than one occasion.  In later periods, rich with written evidence, the author explains the role of rats and other disease vectors,  linking to the ideal conditions in which the two main plague organisms multiplied; one in cold and dry, one in hot and wet. These conditions, found at opposite ends of trading routes, and the disease records in the settlements, mapped well onto the fluctuating influence of El Nino on both Atlantic- and monsoon- driven temperatures and rainfall.

Although I was irritated on several occasions by the author dropping in unsupported and sometimes unconnected items–such as the effect of the Great Smog in London in December 1952 in a section on air pollution in summer–the overall effect of the book is to give a clear connection between not only the direct health of the populations affected by extreme weather, but also the social unrest caused by it: riots, loss of confidence in leaders, overthrow of dictators and/or wars were inevitable conclusions.

It obviously helps if you have a good grasp of at least one of the sciences involved in this book, but it is a fairly easy read for anyone with a good grounding in general science, and a must for anyone with more than a passing interest in climate change and society.

A serious book with a long-range assessment of the effect of climate change on the diseases, famines, social unrest and rise and fall of civilisations. Great for anyone who has a partial perspective on any angle of the subject and wants to integrate with a systems view. Really good overview of the relationships between climate and weather to update anyone with a vague understanding of ocean circulation and El Nino/Monsoon impacts.

Summary chapter really adds the same as others like Stern, Gore, the Dalai Lama, and others–but if we don’t keep saying it….

Book Review | Climate Change and the Health of Nations