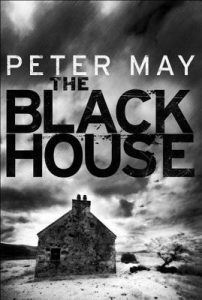 From acclaimed author and dramatist Peter May comes the Barry award-winning The Blackhouse , the first book in the Lewis Trilogy–a riveting mystery series set on the Isle of Lewis in Scotland’s Outer Hebrides.
When a grisly murder occurs on the Isle of Lewis that bears similarities to a brutal killing on the mainland, Edinburgh detective and native islander Fin Macleod is dispatched to the Outer Hebrides to investigate, embarking at the same time on a voyage into his own troubled past.
As Fin reconnects with the people and places of his tortured childhood, the desolate but beautiful island and its ancient customs once again begin to assert their grip on his psyche. Every step toward solving the case brings Fin closer to a dangerous confrontation with the dark events of the past that shaped–and nearly destroyed–his life.

This was a book I’d been looking forward to reading for some time, and recommended to my bookclub–so it’ll be interesting to see what the others thought!

The blurb pretty much says it all, but the mention of the word ‘grisly’ does little to prepare you for the double onslaught of a detailed description of a body hanging up with its abdomen cut open and innards hanging out… followed by the detailed description of the autopsy.  Police procedural it is not, despite all that. Having blunted my senses, they failed to re-engage for the rest of the book.

It was disconcerting early on to switch between Fin in the present (third person) and Fin in his memories (first person) although when the memories went back to his childhood it became easier.  I’ve not been to Lewis, although I’ve been to other Hebridean islands and I’ve worked with a Lewis man, so I have a certain affinity for the place, and the author describes it perfectly.  I did wonder how he came to describe the isolated rock on which the gannets nest in so much detail, and the events that take place on that rock, but he does thank the islanders in his end-matter, so the rest is just skill.  The question whether the plot really hangs together is one I would prefer to duck.  I don’t think it does; although I rather suspected the twist at the end a long time before.  I’m just not sure it’s a story that just didn’t want to wallow in misery piled on top of misery.  And one comment he articulated I highlighted with extreme anger–let’s just say I think he’s very blinkered if he thinks that. I could think of other words, mind.

So, far from looking forward to the next in the series, I’ll be happy never to read another Peter May book in my life.  But his descriptions are vivid.

Oh, and if you’re thinking of buying the 501-page paperback, be aware that at least the first four chapters of book 2 are included at the end.  I hate that.  You may think it’s great value for money – but where do you start the next book if you buy it?

By the way, I hit on a neat way of indicating whether I really recommend a book to you or not; whether I’ve included the ‘add to goodreads’ button or not.  Subtle, eh?

Book Review | The Blackhouse by Peter May

9 thoughts on “Book Review | The Blackhouse by Peter May”