Chuck asked us to give a three word title this week, from which he is going to select ten to give us our prompt for next week.  I’m sure he will say you have to choose something other than one you submitted, so I’m going to pre-empt him by doing this one this week, and one from his obviously awesome list next.  So here are 1000 words to my own suggestion. I only had a snowy track for the picture, but it’s at least an old railway line. 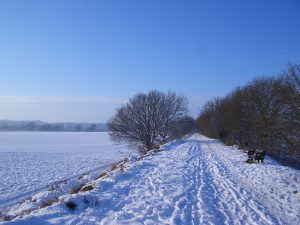 “All things are subject to interpretation; whichever interpretation prevails at a given time is a function of power and not truth.”

Carol walked along the track, pondering the words of Frederick Nietzsche; not much help, yet totally appropriate.

She hunched the backpack higher on her shoulders. Philosophy was all very well, but it led to too much conflict. I think this, you think that. Each person claimed the moral high ground. But they could live alongside each other, just a parallel path.

She glanced sideways. Were there parallel tracks out there, others she should be choosing? Where had she made the decision that made this hers? Was there another her, walking along a different track on a different world, where reality was so much more comfortable than her own?

Karla straightened the pens at the side of her blotter and smoothed the top sheet of paper in front of her.

Analysis of futures: actions and inaction

It was her chance of advancement. If the Führer received it, read the detail, surely he would…

Everyone thought that. Every woman in the Kollegiat was primping her hair to attract his attention. Yet Karla had been selected to present her work—her work, not her professor’s—at the seminar this evening.

The professor protected his reputation through his female students’ work. The women had nothing to lose; they advanced the radical ideas, pushed the boundaries, challenged the accepted doctrines, while the men were elevated above their levels of competence, toeing the line, agreeing with the mundane, the blinkered approaches, the rule of Kapital. The professor could test unorthodoxy, while destroying a woman if it was unacceptable.  He was invulnerable.

It was so unfair. It had been so, even before the Woodstock uprising. A brief spark of freedom of thought, of ideas, snuffed out.

She touched the title page again.

Surely such a great leader would understand the balance of futures, the possibilities, for the benefit of the Fifth Reich?

A bell rang in the courtyard below.

She rose, picked up her report, and started the long walk from her desk, through the corridors of the Massachusetts Institute of Advancement, down the stairs and out to the Stadthalle opposite. Speak clearly and concisely. Make each phrase count. Keep to your script. First: the sustainable Reich; second, the Atlantic Storm; third, the Desert Sands, and fourth, the Machine Revolution.  Four scenarios that developed from the smallest of decisions. Only a small touch on the steering wheel to veer one way or the other.

Of course, the Führer always knew which way was best.

But these parallel possibilities—surely he would wish to know, understand, and guard against them?

She paused at the doors of the Institute. What would happen if she took the left hand route, to the Port instead of the Stadthalle?

Karima walked around the top corridor of the citadel, her western-style clothes hidden under her burka. Since the Revolution, any western-educated women had to be careful, but not nearly as careful as western-educated men. There were so many friends to whom she could only pass messages with the utmost secrecy—for their protection, as well as her own. They were vulnerable, out there on the front line. There was a chance now for benign and enlightened leadership, but all the distortions of sectarian religions pressed upon the politicians, suffocating them, taking them away from the enlightened path.

She paused at a window, looking through the grille onto the narrow streets of the ancient city. The urchins ran around, begging, stealing scraps from merchants to sell for food. The artisans shouted across to each other, borrowing items or tools. A car hooted at animals and bicyclists as it crept forward. Was this her signal? The pattern came again. Yes!

She ran down to the second level and hovered by a doorway.

“Come,” said the woman seated on the huge chair. “Is it time?”

“At last. Follow me. It is time for the world to hear our truths.”

Karima followed the matriarch out of the building, behind the car as it cleared their way, the numbers swelling as the women of the city silently stepped from their own buildings, to join the stream of armed and masked female troops led by the matriarch. The men stood aside in awe and fear, and then joined in, as the black river of humanity pressed steadily onwards to the Parliament building, to stop the madness, and take over the government that threatened their very existence.  It was time to take back truths, and the power to do so was theirs.

Carol paused, took off her pack, and sat down with a sigh.

The stones in front of her feet were rough and pointed. Old railway ballast, probably. Was this an old railway line? It was straight enough, level enough. Right now she was in a low cutting, enough of a bank to give her a seat and a backrest, if she leant back far enough. The trees topping the bank on the other side had grabbed hold with their roots, leaving rainwater an easy route to run off the old fields behind, onto the track, where it drained away.

She pondered the runnels.  Once the bank had been smooth, now it was riven with gullies like lines in an elderly person’s face.  Was that how we aged?  Repeated erosion of the smooth skin of our youth?  Erosion of the truth that led to moral fatigue?

She got to her feet once more, hoisting the pack onto her back in one smooth movement. This would not do. She had to find a purpose, she had to keep walking.

The track stretched out ahead of her, disappearing to a point on the horizon.

In some strange dreamlike state, the tracks on either side of hers did the same, one filled with black-clad women marching, another with a single person evading the dictatorship of an alternative past.

Their parallel lines merged into the same distant point. So what was reality, and what was truth?