Jumping lucky Leprechaun!  Thank you, Mary at Bookhounds, for posting this giveaway hop. 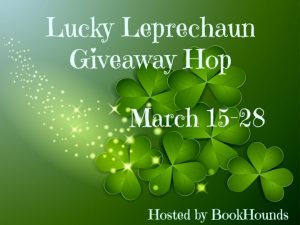 It won’t surprise you too much to find the theme this month is luck.  I’m giving away a lucky winner prize of a lucky book of your choice up to $15 from lucky old Book Depository.

And if you are very lucky, a second winner gets to receive a leprechaun.  I’m still working out the format of this leprechaun.  It may well be a print on half-letter sized (A5) paper.  But it’ll be unique if I draw it, and almost unique (and much better) if my fabulous cover artist Danielle English draws it.  You can see her work on her Twitter or Facebook pages, or on DeviantArt.

Have you seen a leprechaun?  Anything at all like one?

Wikipedia has this to say about them:

A leprechaun (Irish: leipreachán) is a type of fairy in Irish folklore. They are usually depicted as little bearded men, wearing a coat and hat, who partake in mischief. They are solitary creatures who spend their time making and mending shoes and have a hidden pot of gold at the end of the rainbow. If captured by a human, they often grant three wishes in exchange for their freedom. Like other Irish fairies, leprechauns may be derived from the Tuatha Dé Danann.[1] Leprechaun-like creatures rarely appear in Irish mythology and only became prominent in later folklore.

The last time I saw one was when I was a Brownie (junior Girl Guide).  One of the other Sixes were leprechauns – I was a gnome (happy laughing gnomes, helping mother round the home).  I doubt I was in the right Six.