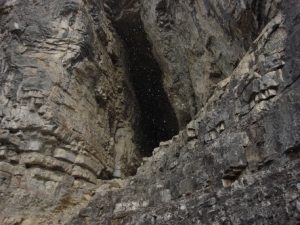 “A monster that has never been seen or imagined by anyone before.”  I doubt whether such a one exists, in truth, but that was the gist of Chuck Wendig’s challenge this week. And last week I left our hapless colour-blind ranger headed off down the road to Hell. It was too good to leave… This one’s longer than usual, at 1700 words, but I’ve kept them shorter recently, so you can settle down with this.

The Monster at the Gates of Hell

The ranger’s long legs had carried him up along the track easily, despite the many rocks, streams and bogs that got in his way. The path was well marked; each of flash-marks that he assumed were coloured green were visible from the previous one.

He ducked under the boughs of a single tree reaching out over the pathway, which ran along the side of a stone wall, the crags and rough grass of the moor stretching upwards on the other side.  He climbed between two huge boulders, and dropped down a gully of shale to a small sandy area in front of a cliff.

A woman sat on a flat boulder to one side of the arena.

The ranger shut his mouth, which he realised had dropped open.

“I apologise for surprising you,” she said, stretching up as if to touch the sky.  Her sleeves fell back to expose exquisitely long and slender arms.  She had very dark hair, tamed by a silver braided circlet around her head, allowing the tresses to tumble over her shoulders without obstructing her face.

The ranger had never seen such a beautiful face.  Emotions lurched through his stomach, heart and other places. Had he found his heart’s desire in Erebor, of all places? But surely, she was a princess or something of the like, since she was richly dressed in a beautiful blue brocade dress, stones of lapis lazuli encrusted on it, along with glints of green mother-of-pearl.

“H-hm-er-hm.” He stuttered, then coughed. Collecting himself, he continued.  “Apologies, my lady, but you startled me.  Er,” he racked his brains for something sensible to say. “Is it far to Erebor now?”

“No, not far at all.”  Her voice was both deep and light, with a musical tone.

He shuffled from one foot to the other, wondering what to say next.  She smiled at him.

“I’ve been travelling since early morning,” he said. “Do you mind if I sit?”

“Not at all.” she waved at the flat boulder she sat on, but he felt that might be too forward, and found a flattish slab on the ground, not far from her feet.

He looked around, seeing no sign of a cottage.  She laughed at him.

“If you want to see my house, you have to pass a test.”

“What sort of test?”

“A simple one.  The question is whether you are ready for it yet.”

He frowned. She may be beautiful, but she was too enigmatic for his taste.  Then again, if they had princesses at Erebor, he should definitely be polite. “How would I know if I were ready?

“You must go into the cave to find out.”

She waved an elegant arm towards a slit at the base of the cliff.  The dark mouth gaped at him, and he shuddered.

“No, it was just a touch of cold wind on my back now I’m cooling down after my walk.”  That was what it had been, after all.  There was nothing at all curious, or indeed suspicious, about a cave.  He stood and faced the cave, hands on his hips.

“That is for you to discover.” Her voice was soft, yet it issued a challenge.  He must go into the cave and face the demons in there, pass the test and gain her eternal love.

He straightened his back, and glanced over his shoulder at her.  For a moment the blue dress shimmered, masking her form, and then it resolved itself into the vision of loveliness as before. He took a step towards the cave.

He stopped, and sat down again, pulling his pack towards him.  Something didn’t feel right.

“I’ll just have a bite first.  Would you like some?  It was fresh yesterday.”

“Apple cake.  A bit stodgy, but it was all the old woman had to share, other than a rotten potato.”

“Er, no, thank you.” She smiled sweetly at him. “You met Mother Shipdam, did you?”

“The old woman in the cottage on the other side of the pass, near the rock that looks like a mare and foal?”

“Just so. I hope she didn’t give you any stupid advice along with that apple cake, did she?”  The princess waved her arms once more, crossing them, describing a circle, and bringing her hands up through the centre of it, opening her palms.

“What apple cake?”  He put the remainder back in its wrappings, brushed the crumbs off his hands and did up his pack.

The lady smiled.  “You are well-travelled, I see.”

“Well, not exactly. This is my first permanent assignment, so I really should be on my way. I must get to Erebor by nightfall.”

“Ah, a ranger. Well, the quickest way to your destination is through that cave there.”

“The path goes through it? I can’t see any markers.”

Again the lady’s cloak shimmered. The ranger rubbed his eyes. He must be getting tired, because he was sure he imagined some other shape behind her.

“There will be markers on the other side of the cave. It is a straight path through. You can’t get lost.”

“Will you be okay here? Can I escort you anywhere?”

“I live here; you will see my home when you leave the cave.”

The ranger stood up again. He hoisted his pack onto his back. “Well, I hope to see you when I pass this way again.”

“I’ll be here.” She smiled at him. He took a few steps forward, then turned towards her again.

“Didn’t you say something about a test?”

“Oh. Well, I’ll just go then. Good-bye.”  He turned again, and walked towards the cave, ignoring the feeling that something odd was going on. Mother Shipdam had warned him of something, but he couldn’t remember her advice. He hovered at the cave entrance, one hand on the rock, and glanced back. The princess was gone. A blue rock blocked the view of the path back up the hill; he didn’t recall it. He looked into the cave. It seemed ordinary; no odd smells, no eerie wails or ghostly shrieks. Too early for bats.

He peered further in, looking for a light at the end of a tunnel—if it really was easy to get through, surely there would be something to guide him.

Ah. A golden firefly hovered before his eyes.

It was so sudden he wondered what had happened. He made to turn back, but there was nothing behind him but rock.

The firefly danced, with a high-pitched intermittent buzz, louder and softer, there and back. The ranger followed it.

After ten steps, he could smell burning.

After twenty steps, he recognised the smell of sulphur.

After thirty steps, he came to a fork in the path, one leading slightly up, the other down.

The lady’s voice echoed from the lower one. “Pass the test, and you will be mine forever.” It sang to him of love, and sunshine, and all good things.

In the dark of the tunnel was only depression and hardship.

He wanted to pass the test.

The firefly appeared again in the upper tunnel, and the song of the lady wafted up the lower one.  Which should he take?

Now he could hear moans echoing along the upper tunnel; somebody was in pain.

“Come to me, this way is safe!” echoed from the lower tunnel.

Why would the lady say the way was safe if he had to pass a test? Besides, his duty as a ranger was to help those in pain or despair. He stepped up into the tunnel leading towards the moans, which had now developed into screams. Something terrible was happening. He shook in his boots.

The firefly danced on, providing him with a welcome sense of self. Why had the lady set him a test then told him where to go? Surely this was the test, to help those in need. He climbed on and on, and the moans got fainter, until they died away altogether. The light grew, and the firefly danced out of the end of the tunnel.

He stepped out onto a ledge and looked down on a ridge separating two valleys below. On the right, it was green, or brown, or at least golden with harvests and vegetation. To the left, there were pools with mists rising from them, and occasional plumes of thick gloop that plopped solidly back onto the surface. The sulphurous smell wafted across. Some sort of volcanic area.

“Good thing you didn’t go that way, eh?” The firefly spoke in his ear, and cackled like the old woman he’d seen the previous day.

The crooked figure of the old woman materialised beside him. “Yes, my boy.  And if you hadn’t taken a fancy to the bite of apple cake when you did, you’d have been done for, for sure. I knew you’d have trouble when you couldn’t tell red from green—you’ve been on the road to hell this last day.”

“Was the blue rock-troll you could see when she wasn’t looking. She nearly had you.”

Realisation flooded the ranger’s mind as his memory also returned. “How can I thank you enough?”

“Just do a good job now you’re at Erebor, and find a new way of telling red from green. It’s autumn now, you darn fool, the leaf you used was already red. I must go now. Be on your way and get to the city before dark.” She turned into a firefly and left.

Useful trick, the ranger thought, getting to his feet and heading down hill towards the city he could clearly see across the golden fields.

And, now he had his memory back, he could remember being told to beware of anyone dressed inappropriately for their situation. Monsters came in all guises, but most often in disguise.

#FridayFlash Fiction | The Monster at the Gates of Hell