‘Hesperides’ sprang to mind when Chuck Wendig challenged us to a prompt involving gods and goddesses.  Why I should think immediately of the Garden of the Hesperides is beyond me.  I even had to look up Hesperides in order to remind myself of the now hazy Greek legends I used to be so fond of.  But then I had an idea… a myths and legends noir mash-up!  Chuck offered us 2000 words, but I thought 1000 was enough today 🙂

The Apple of the Hesperides

Have you ever tried to chat up a goddess?

You have, okay.  But not a real goddess?

Not a real goddess who had just had an almighty row with Zeus and was consoling herself with the waters of Ixthys?

Ah, you begin to understand the problem.

Hera was in no mood for a man, not a mortal man, even if he did have gleaming teeth and rippling muscles.  However much I worked out, I was never going to be a match for Zeus.  After five minutes of posing, I realised the problem.  Zeus had dumped her.  Gods were the worst thing ever invented.  Sly, arrogant, thought only of themselves… I realised my chat up lines had to work a whole lot harder to show I was the man for her.

Being sycophantic wasn’t my style; I could see the bar-faun was doing better than I was.  Hera wanted to tell him her troubles, but he hadn’t got time to listen.  Neither would you if you had cloven hooves which meant you could only serve one jug at a time and had Nymphs Night Out to contend with further down the tree-alley.

“The trouble with bar-fauns, they’re always rushed off their feet,” I tried.

“Never have time to listen to you when you need them.”

She stared at her glass and sniffed again.  One languid arm crossed over the other, clashing gold-and-lapis bangles, reaching to tickle the head of the gryphon balanced precariously on the stool beside her.

“Is that your gryphon?  He’s very gentle.”

“She.  She’s a gryphon.  My only friend in the whole universe, above or below.”

“Gee that’s tough.  Although gryphons are a goddess’s best friend, I guess.”

“What would you know about it?”

I let that slide and called to the bar-faun to top up our drinks.

“Why don’t we take a stroll down to the water’s edge and you can tell me about it.”

“Well, your gryphon’s uncomfortable, so are you, the water’s edge isn’t so crowded and I can carry our drinks.”

She acknowledged the truth of it, and staggered to her feet.  I caught her, hoping that wouldn’t deal me an instant thunderbolt, and set her off in front of me.  The gryphon led the way, as I thought she would.  Smart animals, gryphons. 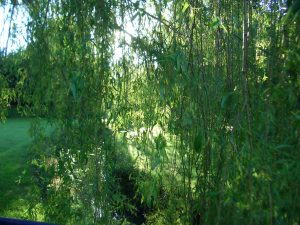 The bank of the river was in gentle sunshine, curtained by newly emerged willow draping itself to spread fingers into the water.  There were a few birds about, but no people or, as far as I could tell, no nymphs lurking.  Nymphs Night Out could take place at any time, but in this orchard, Hera would have the last say over the level of the sun in the sky. Late afternoon, in this case.  I helped her settle on a comfortable and convenient mossy bower, and settled myself at her feet.  The gryphon gave me a baleful look, but shuffled along so we were no longer beak to beak and I could gaze adoringly into Hera’s eyes.

It was a simple enough tale: errant husband sees a slip of a dryad and takes her off to the place where he’d spent his honeymoon, telling his wife he had urgent business with the Trojans. I nodded, uh-huh’d, sniffed, scowled and moued in all the right places.  I prompted her with “and thens…” and then more came out, about other indiscretions, and about the way Heracles had started out championing her but switched to the greater gifts her husband offered. “What more can a hero want than eternal gratitude from a Goddess?”

There’s no answer to that, I thought, but muttered “incredible,” and other suitable nonsenses.

In truth we’d all heard about Hercules and his labours, and wished we’d all had the chance to face the Ladon and steal one of the golden apples that grew in the orchard of Hesperides.  Who wouldn’t?  It was practically the key to one’s heart’s desire.  If you wanted immortality, that is.

I didn’t.  I mean, living forever in a place like the orchard was okay, with a constant stream of dames and interesting travellers checking the place out on their grand tour, but imagining having to live forever as the barman?

After a while, the goddess leant forward, reached for my chin and tipped my face so she could look into my eyes.  Soft, I thought, but gazed into them nevertheless.  She had blue, deep blue eyes, flecked with gold, and a riveting turquoise colour surrounding the irises. I never wanted to leave.  She spoke softly, and I have no idea what she said.  Maybe it was more of her trouble with Zeus.  Then she stood, lifting me as we had sat on the bank.  I realised I was a simple toy in her hands, the gryphon too.  She smiled, waved her other hand so that darkness fell and the stars came out, and suddenly we were seated on velvet and silk cushions in a snug verandah with crickets chirping in the distance.

“You must be hungry,” she said, passing me an apple.

I was, but I was drunk on her eyes.  I felt the fruit pressed into my hand, and raised it to my mouth.  It was delicious.  I listened on to her other woes, troubles of all sorts.  I listened to the indiscretions of her lovers and vowed I would never deceive her.  She drew me closer, stroking my chest, admiring my physique, then testing my athleticism and ability to satisfy her.  For hours.  If I tired (and I did), she gave me wine, or some other invigorating drink of the gods.  I was ready once more, to serve her, to satisfy her insatiable demands.  And listen to her secrets, to lock them away in my memory, to soothe and comfort her whenever she needed it.

At last she tired of me, although she still takes me out and plays with me every now and then.  There are others in this box alongside me.  Others who took the apple and ate without thinking.  Others who simply crossed her and were turned into playthings like a gryphon.  The playthings die once forgotten, those once mortal men like me simply wait to be taken out of the dark, raised to her eyes, and to listen to her woes, or boasts, or plans, but never to speak our own, or speak of hers to anyone else.

Frankly, being a barman for eternity would be a blessing.

#FridayFlash Fiction | The Apple of the Hesperides

3 thoughts on “#FridayFlash Fiction | The Apple of the Hesperides”