Southern Fried leapt out at me as a book I’d love to read, so when it came through as an Escape with Dollycas tour I jumped at the chance.  The only trouble was, it was right in the middle of the A to Z Challenge, and I couldn’t fit it in F or S.  So, here we are with a Sunday post.  Read on for my review of Southern Fried, an interview with author Tonya Kappes, and a giveaway! 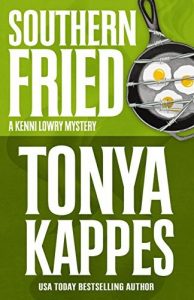 In the South, it’s better when the food is fried and the secrets kept buried…

After the dead body of a beloved Cottonwood resident is found tangled up in an electric fence, Sheriff Kenni Lowry has a hunch that somethin’ ain’t right. Her investigation heats up with a fierce cook-off competition, a euchre game where the intel is sweeter than the brownies, and a decades old family recipe that may just be the proof in the pudding.

The icing on the cake: Kenni is fighting an attraction to her recently sworn-in deputy sheriff, and election season is hot on her tail. When the killer comes after who she holds most dear, even her poppa’s ghostly guidance might not be enough to keep her and her own out of the frying pan.

Southern Fried starts well; the dead body is discovered in the greenhouse of his occasional employer, splattering her ripe prize tomatoes that she was banking on to win her the cook-off competition.  All the evidence suggests she did it.  Fortunately Sheriff Kenni Lowry (Kenni is a woman) doesn’t take anything at face value.  Oh, except phone messages that she accidentally deletes from breathy women she overhears on her hot deputy’s phone.

This is an engaging story full of misdirection and undercurrents–the misdirection being from the neighbours in neighbourly Kentucky, and not from the author!  Undercurrents are both romantic and deadly–both inspire jealousy, I suppose.  Why is the family of a deceased cook in such a turmoil over a secret okra recipe?  The puzzle is nicely tangled and untangled, then retangled and unknotted.  Duke the dog plays a vital part.

What ‘Southern’ meant in genre terms always mystified me; Ms Kappes does her best to explain in the interview below.  The atmosphere comes across in the pages, oozing charm and back-biting in equal measure.  People fall over themselves to help our poor sheriff, rather more than she needs at times.  I have a mental picture of the town and the farmland around it, although there are still things about place that mean I will never be able to write ‘southern’! One week in South Carolina does not help 🙂

I thoroughly enjoyed Southern Fried, so much that I may backtrack to the first Kenni Lowry mystery before the third comes out.  Oh, whoops, it looks like I’ve added another series to my list! 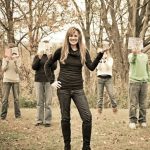 For years, USA Today bestselling author Tonya Kappes has been self-publishing her numerous mystery and romance titles with unprecedented success. She is famous not only for her hilarious plotlines and quirky characters, but her tremendous marketing efforts that have earned her thousands of followers and a devoted street team of fans. Be sure to check out Tonya’s website for upcoming events and news and to sign up for her newsletter! Tonyakappes.com

Welcome, Tonya Kappes, to my blog!

When I first started publishing my books, Tonya seemed already well established, and was part of the movement for indie authors to ‘pay it forward’.  I hope I picked up a little of her generosity and knowledge, and helped to pass it on to others, too.

Hi Tonya.  It’s already 5 years since I published my first ebook, but you were already well established by then – at least that’s how I saw it.  When did you start and how different were things then?

Congratulations to you! I tell you what, now is so much different than five years ago. If I started now, I don’t think I’d been as successful because I think the market is so saturated with self published authors and I think the marketing would have to be endless. Back then, I was able to use different marketing techniques the traditional publishers would NEVER try. I was doing giveaways on Facebook, live videos, Facebook parties and readers loved these events. Now a reader can’t get on facebook and swing a dead cat without being invited to a million Facebook events. I think readers loved it, but now don’t do a lot of the parties. The excitement of them have really lost their luster.

What would you most like to change about ebook publishing today?

Nothing. It’s great. It’s opened a lot of doors for many of us.

One of my flash fiction prompts brings up ’southern gothic’ as a prompt from time to time.  I’m in the UK, and can’t relate to this.  How would you describe Southern genres, and how do they differ from other parts of the US?

Southern mysteries are such a niche that I think I’ve really hit upon. Most of my UK readers really don’t get the southernism but here in the US, we know what it’s like to be given directions like “drive your car yonder, go around the big curve with the white fencing and when you get to a cross on the side of the road it’s right there on the right.” Most of the US isn’t southern and I think it fascinates them how we truly do act and how cozy and gossipy our small towns really are.

If you had the chance to go back and give yourself advice – advice to a wannabe published author – what would you say?

That’s great – I must do that more often! Thanks very much for being part of my blog today.

Now for the Giveaway!

All you need do is leave a comment below, relevant to the book with (kindle) or (epub) – your preferred reading format in case you win – to be entered into a random draw.  The winner will receive an ecopy of Southern Fried from the author!