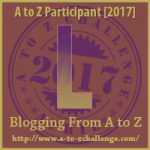 Long Way Home dates from February, when Chuck Wendig got us to devise some three word titles, then picked the best and asked us to write flash fiction to them.  My choice that time was All Flags Fall, but today I’ve picked Long Way Home for my letter L of the A to Z, even though Rebecca Douglass did a gorgeous one at the time.  Strangely enough, Chuck’s challenge for this week is to write the End of a Journey – complete with beginning, middle and end of story. Serendipitous.

Kevin, whom you met yesterday, has not been well for the past ten days, a little tummy upset, which he has recovered from, but it suddenly showed his age (now six and a half).  ‘Five to seven’ is a good age for a guinea pig. Kevin arrived with Colman, two years older than him.  This is Colman’s ‘journey’s end’ – a 1700 word story. 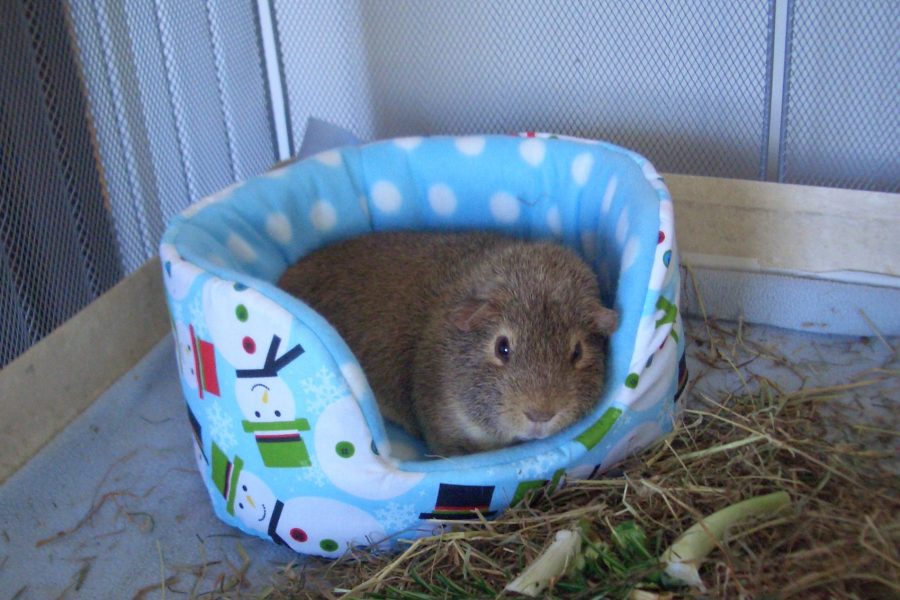 Colman stretched out in his comfortable fleece-lined bed and opened one eye. He shut it again as Kevin moved about on the platform above; he heard him come down his ramp and start nosing around in his food bowl. Then the door in the next room opened and he heard their human padding about.

“Morning, boys,” came her call.  Colman sensed her come through into their room and look in their homes.

“Good boy, Kev,” she said.  She was probably stroking his head.

“How are you today, Col?”  The gentle hand ran itself along his body and he stretched again.  “Still with, us, eh?  Good boy.  I’ll see you later.”

It was part of the morning routine, and had been since they’d arrived after a long journey, one that had taken days, and seen them in at least four forms of transport.  They had left their friends at various stops along the way.  Colman understood that some had had even longer journeys.  He thought the one he and Kevin had was quite long enough.

It had started when their then mummy had disappeared one day, after saying good-bye to all of them, in tears.  For half a moon’s changing they had seen nothing of her, just the other lady coming in to feed them and occasionally clear their cages a little.  Then the journey had started.

All sixteen of them had been settled into carry cages, with water and food, and told to be good.  The van was noisy, and jerky while it was going round the narrow lanes of their island home, but it stopped for a while, and they heard hoots and horns and the sound of the sea. They thought things were strange and uncomfortable, but it got worse.  After lots of bumps and rattles, the van seemed to be in a vast cave, echoing with noises and the sounds of doors slamming.  Next the huge noise reverberated all about them.  Colman and Kevin huddled together, occasionally wheeking at the others, but hardly hearing the responses.  Then, adding to the deafening throb of some mighty monster, came an awful movement.  Colman could never really describe it to anyone outside the group.  First he felt light, then heavy, his tummy sinking through to the fleece on the floor beneath them.  Sometimes they were tossed sideways, and they braced themselves against their carry box, and snuggled for comfort.  It went on and on.  They couldn’t even sleep.

Just as Colman thought he could bear no more, the movement slowed, evened out. They jolted around a few times before they stopped altogether and the noise softened, and eventually stopped.

The van door opened and the man got into the front.  More bangs and rattles and they drove out into daylight once more.  After a few minutes they stopped again and the man got out.

“Here you are, then.  Thanks for the donation.  You want them in here?”

The back doors opened, flooding light onto the travellers in their boxes.  Kevin peered out.

If he hadn’t been so tired he would have leapt in the air, Colman thought, but he staggered forward stretching his limbs a little after the hours in the box, and let out a yelp.

“Colman!”  A girl ran over to him and whispered sweet things through the bars of the box.

Now their boxes were moved into another van, but this time it was mummy’s daddy driving it, and mummy sat up front and turned to talk to them often.  They stopped a few times.  Sometimes mummy just went round with hay and water, and gave them a break from the constant movement, and other times she and daddy left them for a short while before coming back and driving on.

They arrived at what mummy called ‘home’ in the afternoon.  It wasn’t really home.  There were no cages so they stayed in their boxes.  Mummy let them out to stretch their legs, and run around a little, but then it was back in the box.  But it was quiet, so they could talk to each other and reassure each other all would be well now.

“Did you notice Sammo and Podge are missing?” Kevin had done a tally. He was good at that sort of thing, even though he wasn’t much more than one year old.  Colman looked around.  Kevin was right.  Some of the others had been moved into different pairings, too.  Someone came that evening and left with Marcus and Mikey.

“Henry’s moved into another cage in the other room.  A real cage, with Barney.”

Colman looked and saw it was true.  Mummy was cuddling him, giving his bare skin a rub.  She put him back in a proper cage.  But they were all fed and watered; maybe they would get a cage too.

The next day mummy was in tears.  “Oh Coley, I’m sorry, I have to say goodbye.  I don’t want to, but you’ll have a wonderful new home, it’ll be good for you and Kevin, and you’ll meet some wonderful new friends.”

What was she talking about?

A new lady came and collected the boxes with Big Sylv and Bertha, Popkin and Peter, Dani and Rosie… and him and Kevin!  She put theirs on the front seat of her car, and the others on the back seat.  Mummy cried and cried, and Colman cried too.  Why was mummy doing this?  He didn’t want to leave her!

They drove off in a new car, with music playing. “Is that too loud for you?” the new lady asked, and turned the volume down a little.

“Right,” she said.  “I know you’re all very confused and probably frightened.  But you’re going to find some good homes and nice people who’ll look after you.”  After a long time, they stopped and Colman heard the lady talking to some people.  Then she returned and gave him and Kevin some cucumber and celery, which helped their thirst as well.  But she took the boxes from the back seat and closed the door again.  As Kevin tried to pinch the end of Colman’s celery from him the new lady came back.

“Okay, boys?  This is the last stage of your journey now.  We’ll drive for another couple of hours, then you can get out and run around in a new home.”

By now Colman was past caring.  The rumble of the road, the swaying around corners, the noise of the engine seemed endless, and he just put his head under the blanket and tried to ignore it.  He hated everything about it.  And he hated this lady.

He laughed about it with Kevin later.  He’d been cross with Kevin for taking to their new Mummy as if nothing had been different, but then, Kevin was young, and Colman – at three and a half years old – was already set in his ways.  He objected to this new ‘mummy’ taking liberties with him, stroking him as if he belonged here, as if she knew him.  How dare she assume he was going to accept her like he did his real mummy?  He nipped her whenever she did anything that struck him as impertinent.  If she checked his teeth, he tried to bite her fingers.  If she trimmed his toenails, he’d attack the wrist holding him. 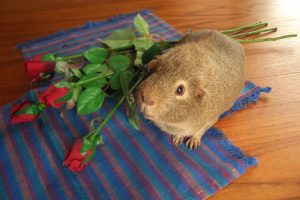 Around Christmas time he started to think it wasn’t worth the effort.  At Valentine’s day, she took him into a room where no other animals had been and spent an hour with him, taking pictures.  He liked having his picture taken.  One of the pictures won a prize, a rosette that the new lady, his new mummy, pinned on his cage. He’d made friends with the other guinea pigs there, and now he was a prizewinner.  Maybe he’d been a bit mean to new mummy.

“You know,” he heard her say to Auntie Vikki one day, “I think he’s forgiven me for taking him away.  He hasn’t bitten me for ages.” 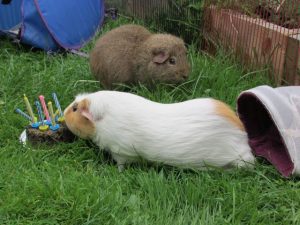 Two and a half years on, Colman celebrated his seventh birthday, with a party in the garden, and a birthday cake.  He and Mummy were great friends, the best of friends.  She gave him special food to help his old age aches and pains, and she nursed him all through the illness with the horrible smelly pus-exuding lump in his neck.  He recovered, ate grass, played with all the others here, and lived with Kevin in the run with the loft upstairs.

Two guys went over the Rainbow Bridge the previous year: Victor and Humphrey, lovely, polite, fun-loving buddies. He still had Kevin by his side; loyal, sensible, clever Kevin.

But he was so tired.  He ate the special food Mummy gave him in the mornings, but he really didn’t want to bother anymore.  When he stopped taking it, Mummy tried to make him.  His joints felt stiff and old and creaky.  He dreamed of green fields and running free with Victor and Humphrey, and all the other friends he used to have – Big Sylv was there already, and so were Sammo, Podge, Popkin and Peter.  It would be fun, and his legs would work properly, and he wouldn’t have pain in his joints.  He’d be young again, at home with all his favourite people. Whenever he thought of that journey, he felt it was a long way home.  But when he thought of Mummy he knew he was home already.

It was an amazing journey, life.  Not many had one as eventful as his.

He felt Mummy pick him up in his bed, and take him downstairs so she could sit and stroke him.  It felt good.  It was the end of a journey, and if he just ran a little faster, he’d run over the Rainbow Bridge and join all the others who had gone before him…