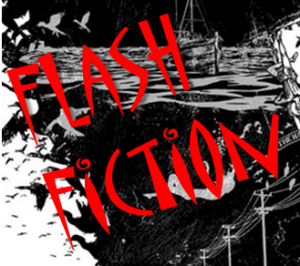 It’s Fridayflash time! I’m a week late with this one, as I explained last Friday, but I think this one’s worth it.

Chuck Wendig is back with a subgenre mash-up – and you know how I like those.  I got ‘Historical Fantasy’ and ‘Heist/Caper’ to mash together, and after a quick check on the detail of Historical fantasy as a genre, I thought it must be a case for Sir Woebegone 🙂

The black sedan drew up in front of the bank with a screech of tyres and a cloud of dust.  A man jumped out, fedora firmly in place as he sprayed bullets from an automatic weapon around the vicinity. Passersby screamed and ran for cover—some behind a surprisingly clean and shiny trash can poised on the edge of the sidewalk. Its tin twanged as bullets ricocheted off.  The man dashed inside, closely pursued by a neatly dressed woman, who also wielded a machine gun.  She turned and threatened any onlookers as she reached the door, but there were none.

A minute later, the man emerged, threw some sacks into the sedan, waited just long enough for the woman to get in on top of the bags, and gunned the engine.  The noise of their departure was drowned by the wail of police sirens and the hubbub of the crowd. Inside the bank, a woman was screaming. The whole event had taken no longer than two minutes.

The cops arrived and pushed through the gathering crowd. Everyone craned to see through the windows, gossip spreading quicker than grease on a newly laundered shirt. At the edge of the crush, the trash can rolled off the sidewalk, sprouted arms and legs, and wandered off to a quieter, shadier spot. Once it found one, it removed its helmet. Sir Woebegone poked his finger through a newly acquired hole in the visor. He checked the one that had allowed the bullet exit past his ear, and fingered his earlobe delicately. No sign of blood. It seemed roughly the shape it had been ever since the dragon breathed heavily one night.

He ran his hands over the rest of his suit of armour, identifying various new dents, but pleased with the ‘impervious’ spell he’d discovered while researching at Hogwarts some time ago.  He thought hard, muttered some words while casting his hand over his helmet, and hoped that would do the trick for next time.

Was he going to make a habit of this?

The hotel lobby in downtown Galveston had three main advantages, from Sir Woebegone’s perspective. They didn’t care how he dressed so long as he paid for his room; it did decent food and drink, and they had a radio which broadcast programmes morning and evening about the day’s events — as seen by the Galveston Post and Globe. Woebegone had already discovered that in this time-slot, news was audible. He’d stopped asking people to read newspapers to him; illiteracy was an invitation to be treated as a vagrant.  Sir Woebegone had no fixed abode, but he was no vagrant.  He just didn’t read the local language.  He wondered how those who spat at him would cope with the script of the monks or the runes of the druids.

Woebegone had already noticed reports of several people who made their living by robbing grocery stores and the mysterious gas stations, but news of a bank robbery had given him an idea.  Now he was listening to the evening broadcast for any clue where he might find the notorious robbers, Bonnie and Clyde. It was surely them he had just witnessed. He’d spent long enough hanging around in front of banks—surely his luck had turned.

“..and now, we bring you the latest in the attempt of Galveston’s finest law enforcement to arrest the notorious felons Bonnie Parker and Clyde Barrow, for their heinous crime yesterday.  Officials of the Trusty Trustees Bank confirmed that in total, over $2000 was forcibly removed from the bank. Counter clerk Hiram Allen is recovering well from his ordeal. Chief of Police Ardman Wellbeing announced they had trailed the criminals as far as a derelict mine in the north of Pequod County. Arrests will certainly follow. We await details, and encourage every law-abiding citizen to stay calm and turn in any information they have that will help put these felons where they belong…”

Sir Woebegone zoned out as the announcer drifted off into the Post and Globe’s usual rant about law enforcement.  He hadn’t decided which they detested more, the law-breakers or the law-enforcers.  It was a strange world, totally unlike his own.  There you just had the rich and the poor.  Although sometimes those who were supposed to be rich had been sponged off for so many years that the second layer of rich were richer than those at the very top.  Now he had an idea how to change that.  He wondered whether the Empress would be grateful, or whether he should just do the deed and keep quiet about his involvement.

Woebegone stood in a dark corner of the lobby, put his hand on his empty scabbard, and imagined a sunlit mine in the dusty hills beyond Galveston, and the couple he had seen in the black sedan.  He closed his eyes… he imagined the smell… he smelled the smell.  Dusty town had given way to dusty country.  Unwashed bodies in city garb were replaced by cattle and horse sweat.  The sounds of cars in the street gave way to wind in small trees and water in a creek below.  He opened his eyes.

It was nothing much. Just some rocks fallen from the slopes above, spindly green trees and some animals down at the creek, occasionally nosing the water and gazing at their own reflections.

The sword-lag wore off, and he wondered where Bonnie and Clyde might be.  His magic sword never let him down, even though he’d returned it to the dragon many years earlier.  Once he had the skill, he kept it.  If he’d imagined Bonnie and Clyde, they’d be nearby.  He spotted an animal track and started along it.

The camp was hidden in the fold of the hillside, but he noticed the shimmer of the air above the fire.  He climbed quietly over the ridge and sat just below the skyline, watching.

“You mean, we go in this here castle, find the vault, blow it, and give you half the stash?”

“Yes, well, I give it to the Empress of course.  He stole it from her in the first place, you see.”

Clyde looked at Bonnie. She shrugged. The glow from the fire masked the twinkle in her eyes. Woebegone sat close to her. Her tension made his armour tingle. She was ‘in’ for sure.

“Well, I don’t rightly know. It’s not like we were doing badly, just doing the stores. Now the banks— the Feds will be after us, just like I said.” Clyde shifted. “What do you think, Bonnie?”

“Hm, maybe. I ain’t got no score to settle with no castle, though. Feds, Texas law-enforcement, they’re different.”

“Come on, Clyde, it’s just loot.  We can get it, and if Mr SirWoewhosit can be trusted to get us in and out, what’s the problem?”

“How did you say that would happen again?”

“You take my arm, one each side, we enter my carriage, and you’ll be there before you know it. You just keep your wits about you as soon as we get there.  We’ll be in and out before Lord Snigglefit knows we’re there.”

“Well…,” Clyde scrubbed a hand around his stubble.

“C’mon Clyde, we’ll be back before dawn, and we can get off to the West Coast where nobody knows us.”

“I reckon they knows us there, Bonnie.”

“Well, some place else then. Got any ideas, Mister?”

“Oh, yes, I can think of some places you could settle with some nice gold to keep you going.” Sir Woebegone started thinking.

It turned out to be just as easy as Sir Woebegone described it. They took his arm, one each side, shut their eyes as he said, stepped forward and felt the air change from warm damp southern Texas to cold damp mediaeval dungeon.

Bonnie and Clyde grabbed.  Sir Woebegone stuffed gold and jewels into sacks he’d borrowed from them.

“I’ll be right back.” He disappeared.

“What?! You low-lying, deep-down scoundrel…”

Sir Woebegone reappeared. “Now, where were we?”

Bonnie and Clyde stared at him.

“Come on, we haven’t got all day. Need some doubloons? Maybe this gold circlet? Yes, they’ll squeeze in there nicely.”

Footsteps echoed on the stone steps leading down to the dungeon. “Time to go, I think. Grab your sacks — now my arms, and…”

The dungeon was replaced by a dry, dusty track leading to a few straggled buildings along a main street. On one side was a small shack where kids lazed around outside, studying books in the shade of a tree. On the other was a small building marked ‘library’.

“I thought you might enjoy it here,” Sir Woebegone said. “Nice people, plenty of interesting events.  You could do well to settle here.”

“What’s it called?” Bonnie asked, looking around her. Woebegone couldn’t decide whether she was interested or dismayed.

“Welcome to Skunk Corners,” he said, and disappeared.