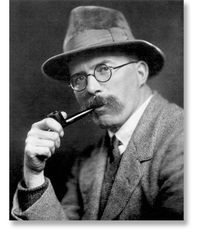 It’ll be fifty years since the death of this prolific writer, who created a series of children’s books that has stood the test of time.  The Swallows and Amazons stories are still as popular as ever – the publisher even brought out new editions recently.

I’d like to thank the website Norwich, City of Stories, for this article.  Click the links in the original to read more about the Norfolk locations Arthur Ransome used, and link to contemporary information and pictures of them.

Born in Leeds in 1884, Arthur’s ancestors were from East Anglia. His family holidayed in the Lake District regularly when he was a child, leading him to develop a fascination and love for the area, particularly the lake. Arthur was a big reader and as a young adult moved to London with aspirations of working in publishing; unfortunately this only lasted a short time and he then went on to write articles for literary magazines – whilst still devouring novels by the bucket load!

He went on to publish a number of books which were generally quite unsuccessful, until 1909 when, having got married that year to Ivy Constance Walker, he published History of Story-Telling, in which Ransome discussed “the development of technique, the conquests of new material, (and) the gradual perfecting of form”, and which was better received than previous work.

Ransom travelled a lot, visiting Russia and writing Six Weeks in Russia, about the country during the time of the Bolshevik takeover. He submitted a synopsis and 50 pages of the story Swallows and Amazons in the spring of 1929, and the book was published in 1930 to positive reviews. It led Arthur to concentrate on writing children’s stories and published a sequel called Swallowdale in 1931. Various books in the series followed and he published Coot Club in November 1934, which was set in the Norfolk Broads, as was later novel The Big Six, which was more of a detective story with the Callums who also featured in Coot Club.

Arthur died aged 83, on 3 June 1967, but his twelve Swallows and Amazons books have lived on as children’s classics. They’ve been published all over the world in various formats, and in many languages.

I read the first Swallows & Amazons book as a child, but didn’t take to it – the original kids were a little too twee for me, although I liked the sound of the Lake District.  But I recently read Coot Club as one of my ‘Local Heroes’ since it’s set in Norfolk.  I enjoyed it so much that I bought The Big Six, the other one set in Norfolk.

As I say in my review, life on the Broads hasn’t changed much, and the Coot Club adventure could just about happen today.

A couple of years back my brother hired [a sailing boat] for a week’s holiday and I joined them for a day. We did the exact sail described in the first part of the story – and nothing has changed.  Ranworth and its wildlife, Horning and its races, and holidaymakers in cruisers flummoxed by sailing boats criss-crossing in front of them. The coots and moorhens nesting at the side of the river, the boom of the bitterns.  The stuck-up cruiser sailors with their yachting caps (and in the 60s, their cravats!) and the women with strangely gaudy unsuitable clothing and loud voices.  Oh, it’s all still there!

I’d add that the main change which could stop this adventure happening now is the ubiquity of mobile phones. But, given we’re in Norfolk, and only one network works at my house, I suspect that reception is patchy over the Broads. Maybe you could still have this rollicking adventure of the local boy protecting the wildlife, arousing the ire of the foreigners, who pursue him all over the Broads, causing havoc wherever they go.

I must get around to reading The Big Six.  It fits with the theme of my giveaway that starts next Saturday!

4 thoughts on “Thank you, Arthur Ransome”