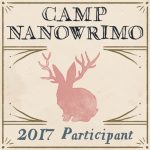 Camp NaNoWriMo – yes it’s back, and so am I.  I finished the edit of Princelings 8 over the past few months and sent it to my editor a couple of days ago.  So now I’m back to the elephant in the room – The Perihelix.

The state of the Perihelix

In a nutshell, the reader response dismayed me, so I pulled it from release in April 2016.  I have been ‘editing’ it ever since.

I sent my revised version to a ‘proper’ editor (i.e. independent and expensive) with the history of the book.

She said roughly: ‘yes, well, I see why people said what they did about it.’

That was on my revised version.  Not helpful.  She did say that it was fine after you got halfway.

If you’re a regular visitor you know some of the soul searching and different approaches since then.  But then I worked on my Princelings books, which after all, meant I recovered some sense of “I can write, just not as well as I’d like to” optimism.  It’s all a bit like my golf, really.

The Plan for Camp NaNoWriMo

Now it’s time to finish tackling The Perihelix, and while I’m at it, do a second edit of Curved Space to Corsair, and if I’m really on a roll, carry on and write the first draft of Zanzibar’s Rings.  I suspect that getting all three sorted will give me more sense of achievement than doing one and publishing it—again.  It also means that all three plots and crossover action will hang together.

During Camp NaNoWriMo I’ll be sending Postcards from Camp again, and only doing Book Reviews if I’ve prepared them in advance.  Flash fiction may turn into a Flash Excerpt.  And unless there’s some real news, that’ll probably be it.

I’m sure you’ll be delighted when I finish The Perihelix. The subject is getting too boring—like most people’s ‘I’m going to write a book one day.’  Well, I know how that feels!

Off to Camp NaNoWriMo at the weekend!

4 thoughts on “Off to Camp NaNoWriMo at the weekend!”