A unicorn from the future appears at the marriage of a Scottish queen. It says: “I am here to talk to you.” 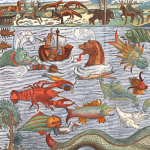 This quote is from the Magic Realism Bot – something someone found and sent to Chuck Wendig, and he sent it to us. It’s weird, but a useful prompt. I’m not sure how this story came to take the twist that it did, but I hope you enjoy a new Sir Woebegone story. The date is quite relevant. It’s 1500 words for a change (just as Chuck suggested).

Sir Woebegone and the Unicorn

The rat-a-tat on his armour woke Sir Woebegone with a start. Oh no! Was he back in the middle of some dreadful 20th Century war? For all the interesting inventions, it was no time to be there. People were angry, forever fighting, and the mud… you wouldn’t believe it. It was no place for a suit of armour, that was for sure—save for the slight protection it gave from the explosive things falling out of the sky.

He risked a peek through the slits in his visor. Not much to see. What there was appeared smeary. He wiped his visor with his gauntlet, which was wet through.  Ah.  He’d turned his hand over in the night, and he’d been catching raindrops. Rain. Lots of it. Driving against his armour. That was all. Maybe he’d stayed where he’d arrived last night. Was it morning now?

He cautiously lifted his visor, so as to see better. Yes, it was raining hard, the tree above him was blowing around, shedding even more water on him, in regular bursts. That was the gunfire effect. He made out dim shapes as he followed the sound of rushing water flowing away from him. He was under a tree on a hillside. Dark shapes looming above him were hills, or small mountains. It was still dark or else the clouds were so thick it cut out the sun completely.

He pulled his visor down and went back to sleep.

Deep in the valley, or rather, glen, below, people were stirring. In the new castle, skivvies were cleaning, polishing, washing and airing all the necessaries for the comfort of the gathering of the clan. Maids were warming water for their ladies’ ablutions. Squires were laying out the tartans for their lords, and putting the final polish on shoes and sporrans. The baker brought a dozen trays of butteries out of the huge oven, and sorted them onto airing trays for breakfast servers. The cook was carving a joint of salted ham, and wondering whether the last barrel of kippers would be enough to go round. It was only a light breaking of fast, just sufficient for the sound of the marriage vows to be heard over the rumble of stomachs.

By the time the new-fangled chiming clock sounded ten bells, the kirk was packed. Sir Woebegone stood by, watching the villagers squeeze around the sides of the windows, hoping to overhear their laird’s bride as she said “I will”. In truth she would be the new Queen of the Highlands, since the laird of the glen had taken the title king from his deceased brother the previous autumn. So much Woebegone gleaned from the gossip.

The bell in the kirk’s turret started to ring, a double stroke to indicate joy, rather than the single toll for a funeral or other disaster. Woebegone looked to see who was operating it, but the single rope disappeared inside. Shrugging was difficult inside a suit of armour, but Woebegone shrugged anyway.  He was only really interested in finding out where and when he was. Scotland mid-eighteenth century was his best guess at present. As long as it was not mid-seventeenth, he reckoned he’d be fine. Judging from the pink stone and turrets of the castle, it was later than the great rebellion in these parts.  People seemed settled, if just as down-trodden as ever.

He stood to one side and watched the wedding procession come down from the castle. The bride was dressed in a simple ivory silk gown, with a sash of blue and green tartan, and a cloak of the same around her shoulders. Her escort wore no tartan, which suggested they weren’t from the glens. She met a bowed old man with a long white beard, who took her arm and led her inside. A squeal and grunt from the bagpipes and they took up a more tuneful refrain.

The voice in Woebgone’s ear was soft and silky. He turned and collapsed in a clattering heap. The peasants close by shushed him.

He took off his helmet and looked at the speaker, then checked the peasants. Even though they were intent on listening, it was surprising nobody had noticed the newcomer.

“You’re not from around here, then?” He kept his tone low, in keeping with the apparently clandestine approach.

“Shall we…?” Woebegone indicated a pleasing grove of silver birch to the side of the kirk. He stumbled on a few of the granite boulders hidden by moss and tufts of grass, but his companion nudged him whenever he looked like losing his balance completely and they made the shelter of the trees without mishap.

“To what do I owe this honour?”

Now that he had time to study his visitor, he frowned. The usual appearance of such a guest was clean—almost shining—well groomed, fit and healthy. This one was thin, drooping and had mud caked around its legs.

“Hardly an honour,” the unicorn replied. “More a curse.”

“That doesn’t sound good.” Woebegone refused to let the being dampen his spirits. Unicorns usually radiated vitality, invigorating their interlocutors and inspiring them to wondrous deeds. Or restoring them to health, or even life. This one looked in need of more than Woebegone’s simple first aid kit. The trouble was, unicorn moods were catching.

“I need you to go back to the future.”

“Surely you can do that yourself.”

“Indeed. I have not yet lost that power. The question is, have you?”

Woebegone hid his expression of exasperation. Unicorns were not generally as oblique as sphinxes, but he’d rather they spoke plainly. “Why would I lose the power of free movement?”

“You have seen the future. Passchendaele, the Somme.”

“Yes, and so have you, by the state of your legs. I’m not going back there.”

“Forward to there. You must. It is imperative.”

“Unicorns do not joke about missions.”

“I thought you were going to say you do not joke, for a moment. That would be a tautology.” The unicorn tossed its head in irritation. Flecks of blood had dried under its mane. “Whose blood is that?” Woebegone asked.

“Nobody is a nobody in war.”

“Everybody is a nobody in war. It’s cannon fodder unless you’re in a cushy job in an office.”

“Your mission is to remove one person from the arena, just one.”

“He’s a talented composer. You’d like his music. We like his music—he composed By the Banks of Green Willow for us. There is more, but he’s in the middle of the ruddy Somme and I can’t get him out, I need your help. It’s urgent. And it’s desperate!”

Woebegone had never seen, or even heard of, a unicorn losing its slow, even temperament. This one had become so agitated Woebegone began to doubt his senses. “If he’s a composer, why is he in the army?”

“Everyone is, in this stupid timeline. Warfare, heroics… Why do they do it?”

Woebegone sighed. It was senseless. He’d visited different rulers on a number of occasions, and he could still make no sense of why things had come to this pass. Arrogance and stupidity were the only explanations. But then, he’d known arrogance and stupidity all his days.  He had a brief flashback to his Empress, arrogance personified. She only feigned the stupidity, though. He sighed again.

“You’ll come then?” The unicorn raised his head. Woebegone could feel its hope growing.

Woebegone sighed once more. “What else did he write? Would I like it?”

“I’m sure you would—A Shropshire Lad, Bredon Hill, Love Blows as the Wind Blows—but if you don’t get a move on, he won’t live to write the rest. Get yourself off to Pozières in July and you’ll be all right. Don’t wait till August, he’ll have to be stopped before he and his men take Munster Alley.”

Woebegone decided. He put his hand to his scabbard, imagined the horrors of the Somme in July. As the Scottish glen started to fade he called “Wait, what regiment?” He failed to hear the unicorn’s response.

He arrived on 31st, sinking into the mud and trying not to get himself blown to pieces. It was raining, of course. Munster Alley was in the enemy’s hands, so no-one could direct him there. He didn’t know which regiment he was looking for, and nobody had heard of an officer called Butterworth.

By 6th August it was too late.

That’s the trouble with unicorns, he told himself. They never give you complete information.

George Butterworth did indeed write By The Banks of Green Willow, which is one of my favourite pieces of music. I only realised he was one of that generation of talents along with the War Poets last week, on the anniversary of his death.  Read more at Wikipedia.

3 thoughts on “#FridayFlash Fiction | Sir Woebegone and the Unicorn”