Did You See Melody? launches in the UK August 24th, and I received an ARC via Net-Galley some months ago.  I like Sophie Hannah, although wasn’t quite so keen on her Poirot adventures.  I thought this would be truer to her usual writing.

Did You See Melody? 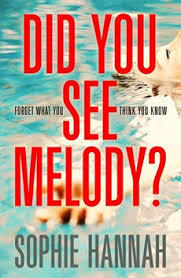 Pushed to the breaking point, Cara Burrows abandons her home and family and escapes to a five-star spa resort she can’t afford. Late at night, exhausted and desperate, she lets herself into her hotel room and is shocked to find it already occupied – by a man and a teenage girl.

A simple mistake on the part of the hotel receptionist – but Cara’s fear intensifies when she works out that the girl she saw alive and well in the hotel room is someone she can’t possibly have seen: the most famous murder victim in the country, Melody Chapa, whose parents are serving life sentences for her murder.

Cara doesn’t know what to trust: everything she’s read and heard about the case, or the evidence of her own eyes. Did she really see Melody? And is she prepared to ask herself that question and answer it honestly if it means risking her own life?

This tense psychological thriller opens with a narrative that doesn’t quite fit with what you expect from the blurb. Then a second narrator takes over and all is well. Then the other narrator pops up, and you start to wonder…

At first I wasn’t sure that Cara had done the sensible thing, to pick an exclusive resort in the Mid-west of America. It was a far cry from her home life and the pressures she’s under in London.  Well, it wasn’t sensible, but it was something I might just do in her place.  The author planted some fascinating clues, and notes from various people floated about in odd places (including the pool, if I remember rightly) to further add to the unreliable narrators that abounded.

I read it in two sittings because I couldn’t put it down – but had to! Wasn’t sure whether the last paragraph worked, until about an hour later when I was still thinking about it. It’s another twist, isn’t it? Brilliant work from Sophie Hannah, and one I may decide to re-read.

Book Review | Did You See Melody? by Sophie Hannah

3 thoughts on “Book Review | Did You See Melody? by Sophie Hannah”