Good versus Evil. That’s what Chuck wants today, and that’s what he gets. I stopped at 800 words; it was what I wanted to do, and I don’t think it needed more. Any genre, he said. I have no idea what this is – I invite your suggestions in the comments!

The Battle of Good versus Evil

The barn door slides open with a bang.  Light floods into our cramped barracks.

Another day fighting evil.  Or is it good?  How would we know, we are just pawns in someone else’s game.

I push Henry off me, since he fell over me last night and I was too knackered to complain. There isn’t enough space here. Not even enough to stand up and sleep. We just fall where we can and hope to survive the night. Aches and pains generally take care of themselves.

We’ve all straightened up now, trying to look alert, like a soldier should. Someone brushes the shoulder of the guy in front of me, but I think it’s old blood. It’s not coming off, at any rate. I hitch my own shoulder up a bit. It feels odd to me, but I know that makes me look straight. Keeps me in the best places, gets me good weapons. Soldiers who sag can’t be trusted. They are first pick for cannon fodder.

Stomp, stomp, stomp.  I love the sound of marching.  Relentless feet in synchrony.  Tramp, tramp, tramp.  Nothing better to put fear in the heart of the enemy.  Especially with a quick blast of a horn to make us cheer.  God, it must be hard to watch this huge column marching relentlessly towards you; a vast machine, an inevitable flow, making you feel antlike in your inferiority.  We are the Powers of… whatever you aren’t.

Now we are at the armoury. I get a spear and a long shield. Uh-huh. Foot-soldier, front rank, probably in centurion dress. Yep, I’m handed a pile of black cloth and leather garments. We march to one end of the battleground and huddle with our legion, dressing quickly, checking each others straps, straightening helmets, buckling each others back straps.

We can hear roars from an assembled crowd somewhere in the distance. It’s a big crowd to sound that loud. Screams rip through the air as the first legion engage the enemy. Horses scream too; sounds more like their attack noises than pain. Fearsome beasts. Biting and kicking with several tons of toned muscle behind every move. I rarely get close to them. Had cavalry behind me once, and I hope never to witness that again. It was carnage.

The orders come; we turn and form line, trudging into our allotted places, then picking up our feet to run into the battleground.

It’s slick with blood beneath our feet. Somebody must have miscalculated badly. Wild things are flying around in the air, some black, others white. The black ones soar over us, cawing excitedly. I think it’s encouragement. Despite the blood, we must be ahead.

Huge sounds echo above us; the crowd responds with cheers. That’s for us.

Buoyed by their support, we take our places.

On the order, turn.

On the order, front rank – kneel.  I plant my shield on the ground, kneel behind it, my spear pointing forward at forty-five degrees, sneaking between my shield and the next. Nothing else can get between us. We are a wall of spikes, protected by our carapace. Behind us, a second row, and a third, two ranks kneeling, the third standing.  All the enemy can see is shields and spears. 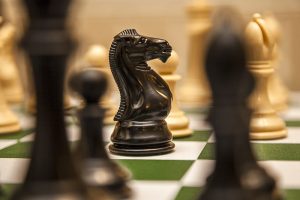 We are the black legion of the Tal, and we are invincible.

We know what that is – the drumming of hoofprints means the white cavalry is charging us. They will fail. We will prevail.

Time and time again, the horses crash against us, throwing riders over our heads to be cut down by the Prince Bishops and eaten before they’re dead by the rooks.

The order comes to move, one step forward, one to the side.  We move as one, heedless of the thuds of swords against our shields.  We stay together, we move as one unit.  Nobody can defeat us, for we fight for the Emperor and he is God.  Or is it the King and Empire today?  It doesn’t matter.  We have our orders, and we move, forward, side, forward, side.

We stop, and adjust ranks to reorder our carapace.

And so it continues.

A change: a subtle retreat.

It encourages our opponents and they leap forward, to be snared in the Prince Bishops’ trap. The knights decimate them – and then the queen appears, slides through our midst, and returns with the head of the white king.

The crowd goes mad.  The order to disperse comes at last, and we return to our barracks to fight another day.

We must be Good today. Good always wins. Except on days when Evil wins and it is not supposed to. Black or White, whichever colour we are, we are always on the side of Good. It’s always Good versus Evil.

Picture of Chess Piece by Ricardo used under CC BY-SA 3.0 (downloaded from Wikipedia)

#FridayFlash Fiction | The Battle of Good versus Evil

4 thoughts on “#FridayFlash Fiction | The Battle of Good versus Evil”