Life gets in the way of blogging sometimes.  Last week was not the busiest I’ve known, but it was one where my attention was required elsewhere. Often. It was mainly Percy Pig’s fault.

Those of you that follow George’s Guinea Pig World and the associated Facebook page already know that Mr Percy Pig was on the sick list with a large lump on his cheek.  I first noticed it in May, the day after Kevin died.  It had probably been growing before then, I’d just been too absorbed with Kevin’s more malicious lump to pay attention. Anyway, Percy had a preliminary op to get a sample from the lump to send to the pathology lab.  That came back inconclusive: it didn’t seem to be an abscess forming, but didn’t appear to be anything else, either, “pre-diagnostic”.  So we waited.

The position of the lump seems to be in the middle of the jaw muscle – not underneath or on top, either of which would be okay for the vet to operate while it was small, the preferred approach. Only when it became large enough to affect Percy did we feel further action would be warranted. It had the potential to be a long and complex operation, possibly invasive.  We considered the impacts on Percy’s quality of life as the main criteria for any decisions to be made. It didn’t seem to cause him pain or irritation, and he mostly wasn’t restricted in his eating or anything else. It wasn’t affecting his teeth. In July, I said to my vet, Sally, ‘let’s give him a nice summer of grass and sunshine and see how he goes.’

By September he was sometimes struggling to clear his mouth after eating.  This just meant various contortions trying to get stuff to move from his cheek.  You know what it’s like when you run your tongue around and can’t get something to move.  I decided that the next operation was not far off.  He might need round-the-clock nursing afterwards, so I picked a date (in conjunction with the vet) when I had some fairly free days afterwards. That was not until six weeks later… Some of my friends took a dim view of my saying I couldn’t do something because of a sick guinea pig!

So Percy Pig went in to have his operation on Wednesday of last week. The plan was to go in, find out what was going on, and take the lump out if possible.  Whether it came out or not, get a sample to send to the lab. (Cue joke about Lab reports and Cat scans.)

I came home and moved the run configuration around so Percy could have his own clean space where I could pick him up easily.  That meant Midge sharing with Bertie instead of Percy, and Bertie would have to use a different ramp if he wanted to use his loft. By the evening the pair of them had decided it wasn’t working, and I confined Bertie to the loft.

Percy came home and Midge spent a lot of time looking at him through the partitions. The vet had not been able to reach the lump without cutting into the muscle, which would have potentially severe effects on Percy’s ability to eat. There had also been more blood than expected.  On the plus side, it definitely did not look like an abscess, so that saved us from the prospect of it bursting and invading his system with toxic gunge. On the minus side, we wait for the lab report to tell us (from the strange tissue which was all she could get from it) whether it is a tumour, benign or not, or something else entirely.

Percy was surprisingly active on his first night home, I think he was so bunged up with painkillers and the like, he felt fine.  He woke up the next morning knowing he’d been in the wars.  He was very poorly indeed on Thursday. I realised the painkiller issue and gave him an extra dose in the afternoon, after which he seemed to pick up a bit. On Friday, he was starting to take walks around his cage, investigating the little bits of food, and eating his pellets.  The wound seems dry and clean, and doesn’t seem to be bothering him.

So on Saturday everyone went back to their usual places.  Bertie is delighted to have his run back, and spent the first half hour running up and down his ramp.  Midge is delighted to have Percy back, and even more delighted to have Percy’s nice bed back.  Percy is used to Midge taking over his bed, so he went and snoozed on Midge’s bed.  Midge has lost weight, possibly because he only had his own bowl of pellets to eat.  Percy has lost weight, but not nearly as much as I’d expect from a pig who’s had an operation. Maybe I’m starting to get the hang of this nursing business, or maybe he’s just a pragmatic pig who takes everything in his stride.

We go back for a check-up this week, and hopefully the lab report will tell us what to expect next. In some ways, what we do about it won’t differ much: Percy will be well cared for to the end of his natural days.  It just might be that we need to monitor him for signs of pain if it turns out to be malignant, and may have to take a final decision rather sooner than if it’s something benign.

Let’s hope for the best, and that Percy Pig lives through the coming winter in time to have the wind on his back, the sun on his face, the grass between his toes, and his nose in the lavender bush come spring-time. 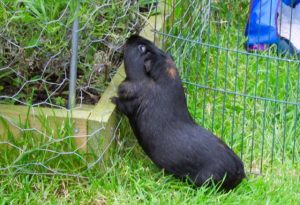 Percy Pig: Life gets in the way of blogging

3 thoughts on “Percy Pig: Life gets in the way of blogging”