The Voyages of the Seven is the second book in the Star Agency Chronicles by R E Weber. I acquired this through Storybundle, so paid a little for it (less than $1). It is definitely worth more than that! I needed a V for my Alphabet Soup Challenge!

The Voyages of the Seven (Star Agency Chronicles #2) 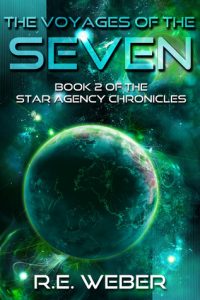 The Seven: the first wave of humanity among the stars.

Theopolis James Logan is finally living his long-cherished dream. Whisked away from his mundane life on Earth – along with six other gifted teenagers – by an alliance of peaceful, alien civilisations known as The Affinity, he has forged a life of excitement and wonder on another world. To his friends, he is a technical specialist, adept in the use of super-advanced technology. However, in secret, he is a covert operative for The Star Agency: the Affinity’s secret service, defending the galaxy against the shadowy forces of the Metah Dah, the Affinity’s sworn enemy.

For centuries, the Star Agency has helped maintain a fragile peace, but when a devastatingly powerful secret weapon is lost, presumed stolen, it sets in motion a chain of events, pushing the Affinity towards the brink of war and plunging the seven human friends into a nerve-shredding battle for survival. Can they survive in a universe more dangerous and unpredictable than they can possibly imagine, or will the dark forces of the enemy triumph, tearing the Affinity apart?[Goodreads]

This was an enjoyable read. I was able to settle into very easily without reading the first in the series. All credit to the author!  It was clear that the first book dealt with the recruitment of these seven human teens into the galactic Affinity.

Here they have nearly finished their training and will soon set out to their first assignments. Two of them get assignments early, one because she shows particular affinity with a strange ant-like species. She can speak their language of clicks and buzzes (with postures) which others have not fathomed. The other, Logan, is naturally our alpha male (although very nice and polite with it). He has to hide his undercover status as he climbs ice mountains and rescues people who have fallen off them.

What I especially enjoyed in this book was the set-up of various political manoeuvrings, of the Star Wars variety, that kept the reader alert for nuances in the plot.  The author writes well, with well-defined characters, sound world-building, and suitably dangerous and exciting adventures.

This is a very good series for younger scifi enthusiasts, with nothing much to offend MG readers’ parents save a little destruction of alien species and potential love interest developing as the teens find their hormones. Worth checking the next in the series!

Book Review | The Voyages of the Seven by R E Weber