Young Explorers Adventure Guide is an annual collection of science fiction stories for children.  I asked for the ARC from NetGalley because science fiction for middle grade readers seems to be in short supply.  Judging from the number of authors included in this work, I’m not sure why. Most of the authors have several notable awards for full-length works including series.  The series includes ‘newer’ writers, but I don’t think that means self-published authors.  It did gave me a Y for my Alphabet Soup Reading Challenge, and moved Oy Yew over to the O in the GMGR A to Z Challenge! 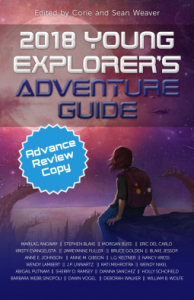 edited by Sean and Corie Weaver

24 science fiction short stories for the middle grade reader from Hugo and Nebula winning authors as well as newer writers.

It’s time for a bigger universe.

Sally Ride, first American woman in space and Presidential Medal of Freedom recipient, famously said: “Young girls need to see role models in whatever careers they may choose, just so they can picture themselves doing those jobs someday. You can’t be what you can’t see.”

Blurb from NetGalley for this edition:

Several excellent works with great ideas and world-building start off this fourth anthology of Young Explorers Adventures. One of them is from the respected author Nancy Kress, who is also quoted in the blurb on Net-Galley and the same quote is used in the 2015 Blurb on Goodreads.

I really enjoyed the first six or so stories.  With the anthologies I’ve read recently, I’ve enjoyed being able to read a whole story in one sitting. I was also keen to get back and see what jewel awaited me next.  Somewhere along the line this anthology lost its sparkle.  There was nothing wrong with the last couple of stories I’d read, but nothing was pulling me back to the next one. It’s possible that after the early, highly innovative stories, the ones in the middle were reminiscent of earlier plots or well-known worlds.  I can’t put my finger on it; they were nicely written, but lacked the inventiveness of others. I know I feel lacking in inspiration at present, but the last one to inspire me was the girl who lived in a mining ship that either was, or bore a distinct resemblance to, a squid.  I think it actually was a spacesquid. It was brilliant, with a well-told twist on an otherwise predictable plot.

Me or the book?

Is this me, or is it a problem for the book?  Middle graders tend not to be too concerned with originality in plot.  That seems to be something craved by older readers – as in ‘I didn’t see that coming’.  For younger readers, the authorities recommend a safe outcome from a dangerous situation. So I’m not too concerned about that.  I was a little disappointed by stories set in the author’s series worlds that really aimed to give you a taster for the series, rather than a self-contained story. That was a shame in one, in particular, where the protagonist had to decide between an operation which would lead her to years of servitude, or blindness and freedom.  I’d like to know how that worked out, but the protags didn’t do it for me.  Maybe I’ll park that for next time we do a scifi BOTM nomination!

All in all, the idea of the anthology series is good, and there are excellent stories in this one.  But for me, this one didn’t quite hit the mark.  Maybe four years is too many, or 24 leads to repetition of great ideas. Maybe it would also help the series if the publishers put more effort into the blurbs [2016 and 2017 don’t have anything], and to putting them on Goodreads in advance of publication.  It didn’t give me the impression the publishers thought highly of them.

So – read if you want some MG science fiction.  I finally managed to link it to Goodreads yesterday. I’m glad it turned up before it’s published on Tuesday (5th Dec).