This Flashback Friday offering comes from April 2014 when I was doing the NATO Phonetic Alphabet for the A to Z Challenge, launching Bravo Victor for B and featuring an excerpt for V.  In previous years I would have been busy with the AtoZ planning now, but I’m not doing it this year.  I think I’ve outgrown it.  That was my assessment last year, and this is the first time I’ve thought of it.  I’m too busy with other things now, like writing!

Anyway – here is an excerpt from Book 6, Bravo Victor.  Don’t forget that book 8, The Princelings of the North, is out next Tuesday!  There are still Goodreads Giveaways to be entered, too.

Victor is asked to help Sundance discover who is behind some illegal activity involving cola export and import.  He follows the likely culprit, the ‘professor’, to his castle high on a rock above the river Rhine, and meets one of his old friends – or adversaries – Hugo, who he usually sees in a different timeline, thanks to the time tunnel [in Books 1 and 4].  Hugo asks Victor’s help in sorting out a little trouble he has with an illegal cola exporter! Things are just getting really complicated when the storm arrives.  Victor takes up the story… 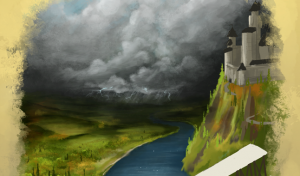 I wake up.  The air is still; it is hot and oppressive, and there is some crackling noise far off in the distance.  My hairs crackle as if ants are crawling through it.  I scratch a bit, then throw back the covers and look out of the window.  Clouds are scudding across the sky, which is weird.  Off in the west a glow catches my eye, but it fades so quickly I think I must have imagined it.  I gaze off into the distance and catch another glow, travelling through the clouds on the horizon.  I rarely have the chance to see this far into the distance, living as I do in a depression in the ground, but I think this may be a far-off thunderstorm.

I hear voices murmuring some way below me, in the place that I now think of as the professor’s study.  There are some noises like books being thrown, or at any rate wooden things falling on the floor.  I remind myself not to jump to hasty conclusions.  Then there is definite shouting, then a loud bang, and then the sound of someone running across the courtyard below me and down the steps towards the entrance of the castle.

“You need me far more than I need you, you know!” the professor yells across the courtyard.  I get the impression of patches of white on the departing figure’s coat.  Why doesn’t Hugo use camouflage when he’s moving around at night?  It really does look like him.

All falls still below me, so I suppose Hugo took off into the night.  I wonder where he’ll go, but then I see a very smart sailing ship leaving the little harbour at the foot of the rock and setting off downstream.  He had his escape all planned, then.  I wonder where that leaves me.

The thunder is getting closer.  The lightning is odd, since it seems to move sideways through the clouds.  I’ve only seen lightning that splits the sky and stabs the earth.  Very spectacular.  This seems to rumble round the clouds, visiting them all.  It rumbles and grumbles and the clouds tumble into new shapes.  Then they start welling up and the wind comes back.  Lightning is now flashing from the clouds down to the ground on the other side of the river.  It is getting much closer now.  Another flash – and another, then a whole connected dancing puppet of them, strung together, stabbing and crashing, with a sound like the whole of the sky splitting.

Now the castle is surrounded by the storm.  Lightning spears are crashing down on the turrets, the clouds are in turmoil, and the wind is grabbing at everything that isn’t anchored in solid rock.  I draw back from the window but hold on tight, afraid I will be sucked into the thick air outside.  Driving rain is going up, down, and sideways.  I am getting soaked, even indoors.  I try to close the shutters but become entangled by the wet drapes; they writhe like serpents and I’m afraid they’ll grab me and throw me out of the window.  I leave the shutters to bang against the wall and run to my bed.  The drapes fly out of the window with an unearthly shriek.  Another double or triple lightning bolt hits, the light glaring off the water.  The placid river I’ve admired is replaced by turbulent white waves that rear up and dive into whirlpools.  I imagine some water monster rising out of the depths and swarming up into the castle to swallow me whole, and I crawl under my bed to hide from it.

– and here is the real Victor with his book! 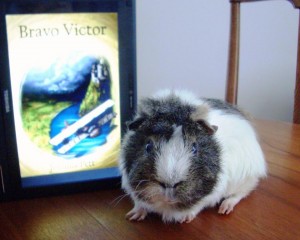 If you are not resident in the US, you are eligible to enter the Goodreads Giveaway for Bravo Victor.

5 thoughts on “Flashback Friday | Bravo Victor, rider of the storm”