Tex-mex was not on the menu in Iceland, although most other things were, especially in Reykjavik.  It is perfectly fine for vegetarians and most special dietary needs, and I even had vegan pizza with vegan cheese one day.  The Nepali restaurant looked intriguing.  Oh, I tell a lie, I saw a TacoBell on the way in…

This incident did not happen.  Names and nationalities have been changed for comic effect.  No prizes for guessing whose hair needed taming. It’s just under 500 words.

Two days earlier they were strangers. 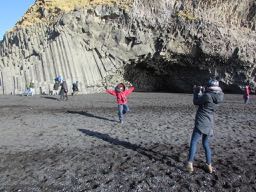 Now they were a gang on a minibus, enjoying the scenery, the guide’s commentary, the comradeship of a multi-national tour.  They smiled at each other’s foibles: the mad Korean insisted on group photos everywhere, and dashed about getting people to snap her in ridiculous poses. The older woman’s hair desperately needed some gel; she played dumb when talking music, but seemed to know a lot about stars. The couple, who weren’t a couple, were a couple holding hands until they saw you.

Nita and Becs took it in turn to supply the nibbles. Nita’s were always Pringles. Becs saw to it that they sampled the delights of the local fare—wrapped sweeties, anyway.

The fourth night they were camping. Midnight feasts were suggested, but the campfire would be put out before bedtime. Safety first.

Exactly why the Korean started yelling at Becs that day, nobody knew. Whatever she was saying bore no relation to anything anyone had been talking about.  The older woman, who was rooming with her, tried calming her down.

“I think she’s going for a walk,” the woman said. “She must have thought you said something else, Becs. She started talking about taxis when I walked in with that bag from the tax-free shop yesterday.”

It didn’t spoil their camping night at the foot of the glacier.  They had raided the supermarket to make a sort of Tex-mex dinner, heating up tins of beans, warming tacos and stuffing cheese and salad in them.  There was fruit, doughnuts, and Pringles afterwards.

At some stage in the middle of the night, Becs got up, dressing enough to make the trip to the privy in decency.

The tent around her collapsed as she started screaming.  The whole camp erupted.

“Vat is ‘appening?” their guide asked.

Everyone stood around as the poor girl emerged, pulled off her knickers and begged for water. She ran off with a waterbottle into the darkness.

“Some little b****d tipped the Pringles into my backpack, that’s what happened. Ruddy Pringles in my smalls.”

In a corner of the tent later, the older woman could see the Korean checking her camera and giggling. Surely she hadn’t taken a picture of Becs in her hour of need?

She thought she’d better mention it to their guide. 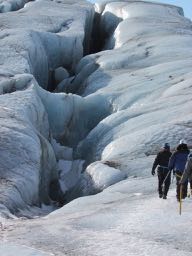 When walking on the glacier, it is best to follow the guide’s advice. Never walk backwards. Always keep your icepick in your hand, or slot it on your belt. Don’t get distracted by the scenery.  Nobody could have accused Becs of encouraging the Korean to go a little farther back for the photo. Such a shame she’d left her icepick on the ground.

It was the first loss the guide had ever had.

This is a work of fiction!