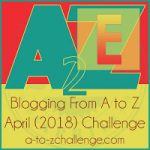 Epping Forest is a most amazing space, completely wild in places, and close enough to London to get there by TfL.  It’s a remnant of Henry VIII’s hunting forests, and given in perpetuity to the people of London by Queen Victoria in 1882.  That’s how it comes to be administered by the City of London.  It straddles the borders of Greater London and Essex, and led to a bit of a furore when they wanted to build the M25 through it, hence the Epping tunnel close to the M11 junction, which has the Epping Foresters Cricket Club on top of it. 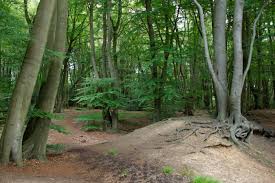 The forest lies along a ridge, keeping it high above the surrounding countryside and giving great views, especially towards the west, over the Lea valley and as far as St Albans on a good day.  This is glacial deposit, which is why it’s so stony, and probably why it wasn’t cleared for farming.  There are ancient gravel workings near the ‘Wake Arms’ roundabout (the Wake Arms pub was demolished in the 1990s).  It has two iron age hill fort, Loughton Camp and Ambresbury Banks.  As a resource for the peasants, it was beyond price – unless of course a price had to be paid for poaching.

The Tudors used it for hunting, and part of Queen Elizabeth’s Hunting Lodge still stands (exhibitions and nice cafe there) on the plain at Chingford.

Dick Turpin was reputed to use the forest as a hangout (Epping was a major coaching stop, the first night stop outside London).  His cave is supposed to be in a dell opposite the Robin Hood pub, but I’ve never found it (I’ve looked!).

During World War 2 it was a good place to receive bombs that missed the Blitz, or that hadn’t been used by bombers returning to base.  There are plenty of groups of impact craters, and one set in particular trace a neat line from the direction of the east London docks.

There is even a memorial to Churchill in the southern part.  I suppose it’s not surprising, since he was MP for Epping Forest and Woodford at one stage of his career. 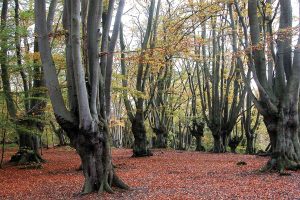 My theme for the A to Z being ‘inspiration’, you might ask why I’m blogging about it.

The forest is very close to my heart.  I had twenty-five years of using it; for walks, training, and for orienteering competitions. I planned courses for numerous events on it, and produced the new map of Epping East (as we called it), based on John Pearce’s previous version.  When you plan or map an area, you get to know it intimately.  It means you go for long walks, checking out routes, areas, lines of craters (see above), and marshy and brambly areas.

It’s a mature forest full of high hornbeams with deep leaf litter underneath, making trackless cathedrals that are a joy at any time of year, but especially spring and autumn sunshine. It has pollarded beech and hornbeams making strange fantasy creatures that I love to draw (and have sold as paintings). There are secret valleys with springs of horsetail along the line of the stream; horsetail is one of the oldest plants—it’s known from the fossil record.  There are sudden clearings with lawns that look like they’ve been mown.  They probably have, by deer and rabbits, and by the cattle that are still allowed to roam freely.  The birdlife is extraordinary, but often hard to pick out in the high trees—finding nuthatches by call is one talent I learnt.

Epping Forest in my writing

Unfortunately I’m short of pictures of the Forest; all of mine are from the pre-digital age.  But the memory has the best bits stored in it, and I use them for descriptive passages of forests in my writing.  This passage is from the Princelings and the Lost City. Fred, George and Kira spend the night in a clearing (complete with nightjar [a nocturnal bird], which have not been known in Epping Forest for nearly a century, but do inhabit Thetford Forest about 50 miles north), then go along the track which looks most promising.

[George] followed the tracks across the clearing. There seemed to be a sort of crossroads at an angle, … and the track he was on continued west until he got to the edge of the clearing. The road wound down a small slope and crossed what looked like a very small stream, then it wound up the other side on a slant to the right, turned a corner, and was swallowed up by the trees. The trees were mainly tall and knobbly, with brambles and saplings growing beneath them, but over on the north side they gave way to thinner straight fir trees, which stood like an army, looking dark and gloomy the further you went in.  The Princelings and the Lost City, Chapter 3.

That describes a part on the main track going south from the Loughton Rd/Wake Arms Rd crossing towards Monks Wood.

I suspect Epping Forest’s trees also inspire my tree-aliens in my Viridian Series as well. 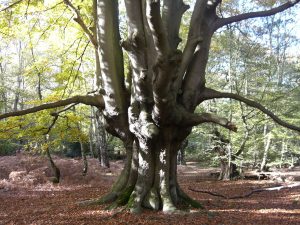 What places inspire you?  Let me know in the comments!

E is for Epping Forest #AtoZChallenge2018

17 thoughts on “E is for Epping Forest #AtoZChallenge2018”