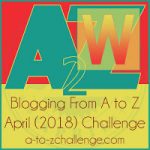 White horses definitely inspire me, but I haven’t used them in my writing yet.  Well, I’ve used the figurative white horses that got round film censorship in the 1940s.  You don’t know what I mean?  That was when any more than the idea of a couple kissing about on a beach was banned.  Cut instead to a picture of white horses breaking on the beach.  Highly suggestive, maybe, but in From Here to Eternity I just thought it was nice of them to roll about on the beach watching the waves and the sunset.  Now it just makes me laugh!

White Horses in the Camargue 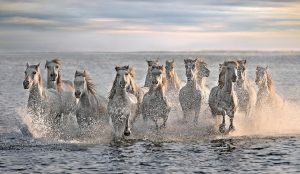 The Camargue, made by the Rhone delta in the south of France, is well-known for being a place of wild white horses.  I can’t remember when I first learnt about them, although I feel I already knew them before I read one of Pat Smythe’s books set there.

If you don’t know Pat Smythe, she was one of the UK’s top showjumpers in the 1950s. She went on to write stories, including a series called the Three Jays.  These were three horse-mad kids, a boy and two girls, whose names all began with J.  They spent their holidays at their aunt’s – Pat Smythe’s –  and got up to all the usual horsey mischief.  Even better, their aunt took them with her when she had to travel, especially for her writing.  I can’t remember the story of the Camargue, but it certainly hit the spot for me.  I also remember them going to Rome for the 1960 Olympics (where Pat Smythe competed), and to Argentina, because they had an adventure on the pampas with gauchos.  And sometimes people ask me where I got all this strange and varied knowledge from. Well, from reading!

The Camargue kept its strange fascination for me, though.  I still occasionally plot a vacation there.  Once I looked into the possibility of taking Fred and George with me to the south of France, see the Camargue, and then go to work at a conference on the way back.  I gave up the idea, partly because of the time involved, partly due to the temperatures and the potential lack of grass, and finally, because I got Hugo and Victor, and travelling that far with four was out of the question.

It still haunts me, though.  Any movies set in the Camargue, any tv series… yes, even the dreadful 70s White Horses TV show with that horrible earworm of a theme tune! 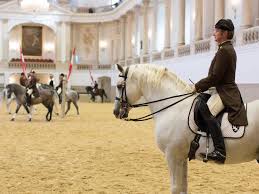 There are plenty of white horses in Vienna – at least there are in the Spanish Riding School.  These are Lipizzaners, which are always grey turning whiter as they get older. If you visit any time outside their holiday or touring seasons, you can see the horses going through their training routines at specific times in the mornings.

I thoroughly enjoyed my visit, especially watching one of the senior riders coming out first on a young horse, whom he was teaching to walk and trot in a balanced manner around the manège.  Then he swapped onto a more experienced horse, and did some collected work, some shoulder-ins, and back to steady trotting and a little canter, then relaxing.  Finally he swapped onto what was obviously one of the stars of the show, a magnificent stallion, and he just proceeded around the arena in a walk, then in collected trot, did a few piaffes and then walked out. Clearly the master!

I believe that it is an English peculiarity, and mainly confined to the chalk hills of southern England, for inhabitants to carve horses out of the grass on the hillsides.  Two of my favourites are the Uffington white horse and the Westbury white horse.   There is a horse in the Yorkshire Moors National Park at Kilburn, carved onto limestone, so he has to be whitened.

I am dying to write a horse book.  Maybe a modern equivalent of Black Beauty using a racehorse as an example, but I haven’t got any further with that.  I really ought to write a Camargue mystery, then I’d have to go down there to do some research…  The funny thing is, I’ve never done a horse story even as a flash fiction, although horses often turn up being ridden (and often communicating verbally with their riders).

But I have included a chalk white horse based on the Uffington one, and created the castle named after it, in The Talent Seekers.

So many stories to be written, so little time….

Have a short figurative extract from The Perihelix, instead!  This is Lars, who has finally been joined on his vacation by the girl he’s been dreaming about while he was working in the asteroid field, Aramintha.

Leaving the surfboard standing sentinel behind them, Lars demonstrated the superiority of the short-cropped turf further up among the dunes.

“Mmm,” she said, curling a stray tuft of his blond hair around her finger. “I’ve missed you.”

He gazed at her face, noting how her eyes caught his, and then switched into the distance. The voice he’d heard last night echoed in his head: we will protect you when she comes.

Whom did he trust? This woman whose company he’d desired for months, who’d been hired by what seemed to be an Imperium agent? Or some disembodied voices from a drunken dream?

Well, if he had their protection, he might as well enjoy himself. He pulled Aramintha into another rough embrace, and they tumbled over each other on the soft grass.

The waves withdrew, exposing berms, rocks, and rills as they headed for low tide.

W is for White Horses #AtoZChallenge2018

12 thoughts on “W is for White Horses #AtoZChallenge2018”