The Company of Eight was a book I requested on Net-Galley, so I thank them and the publishers for allowing me a review copy.  As usual, my review is my honest opinion of the book.

The Company of Eight 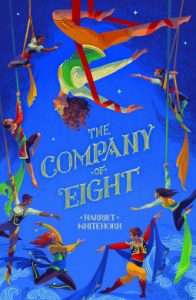 When Ravellous’s Circus Ship comes to Minaris, Cass is determined to audition despite her guardian Mrs Potts’s disapproval. But when her chance is snatched away from her, Cass refuses to give up. She sets out to follow the Circus Ship and the journey leads her into dangers that challenge even her adventurous spirit. Will she succeed in following her dream, or is her destiny something altogether different? [Goodreads]

I’m not sure whether the cover or the blurb attracted me more, but I found a treat waiting between the pages.

Ms Whitehorn’s world has a map (bonus points) but I never quite got what the world was called.  It’s mainly made of islands. The ships that ply within them are the main source of entertainment whether they mean to be or not.  Ravellous’s Circus Ship definitely intends to be.  The world is somewhere between feudal and gangster. It also has pirates who can be crude or sophisticated, and an island full of women.  So I’d class this as an adventurous girl’s story, and I enjoyed it tremendously.

I read it around the time I was doing my K for Kenneth Grahame post.  In that I pondered the use of language to induce almost tactile sensations in the reader.  Ms Whitehorn does a pretty good job of this too. I recall feeling warmer as the voyage continued without consciously being told the climate was changing.  Cass is an excellent character, and meets many other well-rounded characters of all genders and levels of power and wealth.  I felt the poverty-stricken were rendered ingenious, and some of the powerful rather stupid, but then, that’s the problem of inbreeding and lack of incentive.  In fact it was a very believable fantasy.

If I have a criticism, then maybe some of the plot elements were predictable, but the Company of Eight was thoroughly enjoyable all the same.  It’s set up for further adventures in the series (while being a completed book in its own right) so I hope we see more of Cass and her ‘friends’.

Book Review | The Company of Eight by Harriet Whitehorn