Daemon has been hanging around near the top of my TBR for years.  Poor Doug Dandridge has had to wait over 5 years for me to review his book, and I bet I got it in an offer of some sort.  So if anyone’s had any of mine for that long, yes, it’s fine, but a review sometime would be delightful!

But Daemon was worth waiting for, and hit three of my reading challenges! 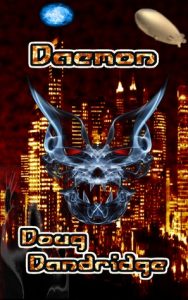 It is a world of magic where technology has stagnated for centuries. But the magic has been killing the world. Left is the last of the megacities, a million square miles of living land, and the last sixty million people. And the Shadows, the negative energy remains of the animals that used to roam the Earth. The Shadows prey on the living, and can only be kept at bay by light. But light requires magical energy, and that is in short supply.

Daemon Corporation, the world’s richest company, controlled by the world’s most powerful mage, has found the solution. To rape other worlds of their life. Such a world has been found, and the innocents taken to our world to be sacrificed for their life energy. Something else has come with the little men from the other dimension. A force which cannot be stopped, on a mission to kill the men and women who are responsible.

Jude Parkinson is a forensics’ mage, one who communes with the dead, and sees through their eyes the last moments of their lives. He uses this power to solve murders, and only he can find out who is sending this Daemonic force to kill and kill again. But he finds out about the genocide being committed by Daemon Corp. Only the Church of God Ascendant, the last religion in an Atheistic world, stands with him. Will that be enough? Or will the world continue down a path of damnation?

The blurb reveals quite a lot about the story, and some of it is not for the squeamish – or at any rate, anyone who loves small furry animals who might be sentient.

Doug Dandridge weaves a complex story involving magic, power and alternative science, some of which is designed and some opportunistic.  Many of the characters are playing with forces they do not understand, and that makes for some powerful (and creepy) events.  The dystopian world has retreated into itself, a little island of technology surrounded by The Darkness, where horrible things lurk, ready to eat the survivors.

This is an absorbing world (in more ways than one, I realise as I write that) and as a reader, I was reluctant to leave it when our hero did, to venture outside.  For a time I resented leaving the techno-excitement for a simple, almost Amish approach to life.  But the contrast was well handled and however much I twitch at organised religion in stories, this made sense in itself, and that is all a reader can really ask.

There were two questions I was left with, though.  One was ‘why did I wait so long to discover this gem?’ and the other was ‘what happened to…?’  Maybe there’s a sequel.  Or their story.  I must look it up.  I must also add more Doug Dandridge to my reading list, and not wait five years to get around to reading more of his work!

Although, I realise I’d really like to re-read this.  I think I’ll add another star to my rating!

PS I added Afterlife to my TBR.  Let’s see how long it takes to rise to the top 🙂