Elly Griffiths published her tenth Ruth Galloway book in February.  Despite having pre-ordered the paperback version from Amazon (due out in July), I got an ARC from NetGalley, and then wondered whether I was doing the right thing, since I had only finished number six, The Outcast Dead in September.

Then I realised that number seven, The Ghost Fields, would make an excellent G for the A to Z Challenge, so I read that in February, and promptly got a non-crime G, A Grand Old Time, which was going to be published in early April.  So that became my G post, and the Ghost Fields lay unreviewed…

Roll on Easter, and I decided to give myself a break from everything else I was supposed to be doing.  What better than an Elly Griffiths book?  So I read book 8, The Woman In Blue.  Then I thought, well, why not have an Elly Griffiths bookfest?  So Book 9, The Chalk Pit, went through just as a mysterious hole appeared on the first fairway at Royal Norwich Golf Club.  Were the mysteries of the chalk caves under Norwich at fault?  I talked about that for my N for Norfolk post.  And then I went straight on into book ten, the Dark Angel. Those I finished on April 2nd, 5th, and 6th, in case you wondered. It was exactly the right weather for books. 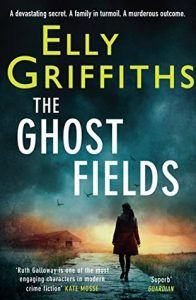 The chilling discovery of a downed World War II plane with a body inside leads Ruth and DCI Nelson to uncover a wealthy family’s secrets in the seventh Ruth Galloway mystery.

Bits of downed planes still turn up in fields in Norfolk even now. So doing a book featuring one of them is a good idea. Even better is having the pilot as a long-lost relative of the local landowners, who are a dysfunctional family living together, several generations under one dilapidated roof, in an old hall miles from anywhere.

The main problem was that the pilot did not fly the type of plane he was found in, and there was a record of his last mission. Cue more meetings between Ruth Galloway and DCI Nelson, whose name is Harry, which I often forget as everyone calls him Nelson.

This is a well-crafted book that I occasionally got lost in, mainly because I placed the hall and field in my own mind without listening properly to Elly’s clues.  I was therefore taken aback by the flooding incident.  I meant to look up whether there really was a flooding incident of this magnitude in the Hunstanton area in the timescale she mentioned, but one thing the author takes pains over is her basis in fact. So I’ll leave it, because it’s not fair to the author to expect every plot detail to fit local history.

There are several details in this book which have nothing to do with the crime, or cold case, and much to do with the series story arc. It was entirely the right decision to read them in order… and becomes even more so as they progress.  It’s fair to say I’m addicted, but then again, it’s worth getting addicted to these.  You could jump in at this point, but I wouldn’t leave it too much later, if I were you. 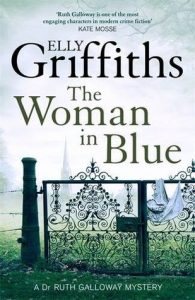 Book 8: The Woman in Blue

In the next Ruth Galloway mystery, a vision of the Virgin Mary foreshadows a string of cold-blooded murders, revealing a dark current of religious fanaticism in an old medieval town.

Walsingham is a famous pilgrimage site, so much so that I have studiously avoided it. I did go through it on the bus between Fakenham and Wells-next-the-Sea on a day trip to see how to do the North Norfolk coast by bus. I didn’t stop.  Reading Elly Griffiths’ version is quite enough for me. It gives me the creeps and is full of suspicious and/or weird characters.

The story Elly Griffiths crafts here is full of hidden meanings, plenty of red herrings, and although I spotted the perpetrator early on, I dismissed him again, thinking that he couldn’t possibly be. Of course, I missed the nuances of the plot until the disclosure!

Beautifully and twistedly-spun book full of superstition and the realities of modern life. 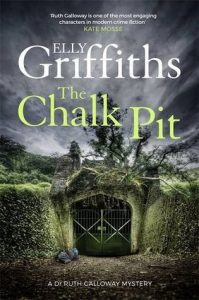 Boiled human bones have been found in Norwich’s web of underground tunnels. When Dr Ruth Galloway discovers they are recent – the boiling not the medieval curiosity she thought – DCI Nelson has a murder enquiry on his hands.

This story shifts between Norwich and Kings Lynn, sometimes catching me out thinking we’re in one when we’ve moved to the other.  Actually no, I always get caught out thinking we’re in Norwich (my patch) when we’ve gone back to Kings Lynn. Along with the bones found which bring Ruth into the picture, there are also disappearing homeless people, and disappearing women who may or may not be homeless.

It gets quite scary.  It also gets quite scary with long-run characters are making life mistakes and sending me into panics of worries about their futures. This is why I don’t watch soaps, really. But somehow reading them in a crime thriller is not a soap at all.

You should not read this one without having read at least from the Ghost Fields (and preferably Dying Fall) onwards.  And I think I was very lucky to pick up The Dark Angel straight afterwards, because they follow on, on the same day, in the same place. 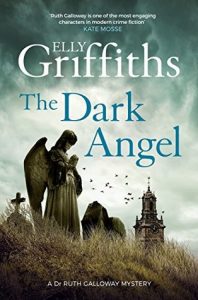 Dr Ruth Galloway is flattered when she receives a letter from Italian archaeologist Dr Angelo Morelli, asking for her help. He’s discovered a group of bones in a tiny hilltop village but doesn’t know what to make of them. It’s years since Ruth has had a holiday, and even a working holiday to Italy is very welcome!

Picking up from where we left off, the author gives Ruth the chance of a holiday in Italy, where the author’s family originated. That’s a lovely touch! Except that there are deep dark secrets that are nothing to do with the mafia, and the place Ruth stays seems to draw her unwanted attention at strange hours of the night.

In some ways the plot of this book seems contrived (since of course Nelson has to get out there as well), but several further complications in Harry Nelson’s convoluted life appear as a result of events in this and the last book.  However, my immediate reaction was ‘gripping, heart-rending and inspirational’. So maybe it is better reviewed fresh!

Where is it all going to end?  I start to think the story has nearly run its course, and Ruth should get out of the triangle, or quadrangle, or even quintangle she’s found herself in.

I can’t wait for the next one… but I’m going to have to wait another year, at least!

And of course that’s brought me up to date in the Ruth Galloway series, which is a big help in my Finishing the Series Reading Challenge.

One thought on “Book Reviews | An Elly Griffiths BookFest”