The Secret Horses of Briar Hill was the June Book of the Month for the GMGR Goodreads Group.  I’d set the theme of ‘horses’ and there was a good set of nominations, from Black Beauty right the way through to something about to be published (which wasn’t eligible!).  I thought I might have reserved it at the library just in time for me to get it in June, but it didn’t get on the bus in time.  So I read it pretty much straight away when the mobile library visited in July. 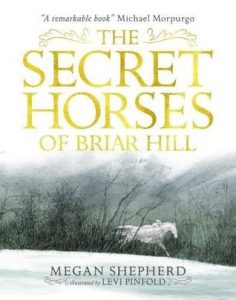 The Secret Horses of Briar Hill

by Megan Shepherd, illustrations by Levi Pinfold
There are winged horses that live in the mirrors of Briar Hill hospital. In the mirrors that line its grand hallways, which once belonged to a princess. In those that reflect the elegant rooms, now filled with sick children. It is her secret.
One morning, when Emmaline climbs over the wall of the hospital’s abandoned gardens, she discovers something incredible: a white horse with broken wings has left the mirror-world and entered her own.
Tucked into the garden’s once-gleaming sundial, Emmaline finds a letter from the Horse Lord. He is hiding the wounded white horse, named Foxfire, from a dark and sinister force—a Black Horse who hunts by colorless moonlight. If Emmaline is to keep the Black Horse from finding her new friend, she must collect colorful objects with which to blind him. But where can Emmaline find color when her world is filled with gray? [goodreads]

The quote on the cover from Michael Morpurgo is “A remarkable book”.  That’s it in a nutshell.

Emmaline missed the child refugee dispersal at the start of World War 2. So many kids from cities were evacuated to the country.  Her strange memories of the night the bakery where they lived caught fire haunt her; she still hears the horses kicking at the doors to be let out. After she escaped, they installed her in a sanatorium in the middle of Shropshire, where they treat children with tuberculosis.

At the start of the Secret Horses of Briar Hill I was underwhelmed, but felt I had to keep reading it now I’d finally got a copy.  I found the mirrors with winged horses in them interesting, the injured wild horse in the secret garden reminiscent of, well, The Secret Garden, and other stories I read as a child.  Someone will probably supply the right title to the secret garden story where the clock struck thirteen, but didn’t have the characters of the more famous Secret Garden!  I found the illustrations unnerving, since they were so like those in Wonderstruck. Amazingly, we read that 4 years ago – already!  So there are a little too many things that seem to have been borrowed from other books.

But Emmaline’s situation is complicated by the task to collect bright colours to protect the injured winged horse, a mysterious Horse Lord, and the progressive illness of her best friend, Anna, who has exciting things like coloured pencils.  Of course, the other kids who think she’s slightly nuts.  Her own TB (called stillwaters) is also progressing. It becomes a race against time to heal the horse before either the Black Horse finds her or Emmaline sinks beneath the waves.

I’m not sure whether the writing, the characters or the plot gathered me in and rushed me onwards.  Something certainly did. I read much of it in two sittings, after taking several to get started.  Many of the reading group have found the ambiguous ending unsettling.  I’m not sure what I made of it. The author includes an ‘afterword’ to make it clear she thinks you will make your own decision.

I think that is, in the end, what makes it remarkable.  It drags you in, and leaves you wondering.  The reader makes his or her own choice. Would the target audience like that or hate it?  I suspect I might have liked it then more than I do know, but others think the reverse.  Always good to have some controversy!  I gave the Secret Horses of Briar Hill four Goodreads stars, anyway.

2 thoughts on “Book Review | The Secret Horses of Briar Hill”