The Mystery of Three Quarters is a new Hercule Poirot Mystery from Sophie Hannah, published on 23rd August.  I’m very grateful to the publishers HarperCollins (HarperFiction) and to Net-Galley for a pre-release review copy.  As you know I’ve already read The Monogram Murders, so I can add this to my Series Challenge, although I still have to read Closed Casket – which I thought I had! 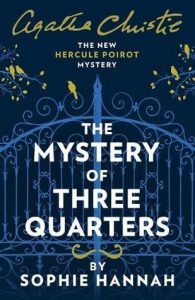 Returning home from a luncheon, Hercule Poirot is met at his door by an imperious woman who introduces herself as Sylvia Rule. “How dare you? How dare you send me such a letter?” Ignoring his denials, Mrs. Rule insists that she received a missive claiming he had proof she murdered a man named Barnabas Pandy and advising her to confess her crime to the police. Threatening the perplexed Poirot with a lawsuit, she leaves in a huff.

Minutes later, a rather disheveled man named John McCrodden appears. “I got your letter accusing me of the murder of Barnabas Pandy.” Calmly, Poirot again rebuts the charge. Each insisting they are victims of a conspiracy, Mrs. Rule and Mr. McCrodden deny knowing who Pandy is.

Why did someone send letters in Poirot’s name accusing people of murder? If Pandy’s death was an accident, why charge foul play? It is precisely because he is the great Hercule Poirot that he would never knowingly accuse an innocent person of a crime. Someone is trying to make mischief, and the instigator wants Poirot involved.

Engaging the help of Edward Catchpool, his Scotland Yard policeman friend, Poirot begins to dig into the investigation, exerting his little grey cells to solve an elaborate puzzle involving a tangled web of relationships, scandalous secrets, and past misdeeds.

I went smoothly into this mystery, aided perhaps by watching a couple of Poirot’s on the tv the weekend before.  Either I’ve got more used to the style, or Ms Hannah has really got into her stride in the Poirot delivery.  Her own thrillers contrast in their modernity (e.g. The Narrow Bed); I think the Monogram Murders was a little stilted, but now the Poirot style fits her.  The new mantle has lost its stiffness and become a good warming friend.

Imagine three people rushing up to you in various states of excitement, complaining you’d accused them of murdering someone. This is Poirot’s opening predicament, and naturally he is both stimulated to investigate who would do such a thing using his name, and suspicious that they want him to investigate something without drawing attention to themselves.

Three quarters (using a slice of Battenberg cake to stimulate his little grey cells as well as his sweet tooth) suggest there is a fourth letter, too.  Finding the link between these people is the main part of the problem.  After that, Poirot questions whether one of them, or indeed all of them, are complicit in a murder, or whether it is, as it seems an accidental death.

Ms Hannah creates a most enjoyable puzzle. Several red herrings and alternative possibilities lead you astray, but there is a niggle that keeps bringing you back to your first thought.  Or maybe it was your second. I thoroughly enjoyed this book; the characters were believable, the settings pleasantly varied, and the bile, anger and shattered dreams that filtered through various strands of the family were enough to keep any soap opera full of viewers for months. It didn’t take me long to read, simply because I was eager to see what happened next.

The Mystery of Three Quarters is a first class addition to the Poirot adventures, and full marks to Ms Hannah.